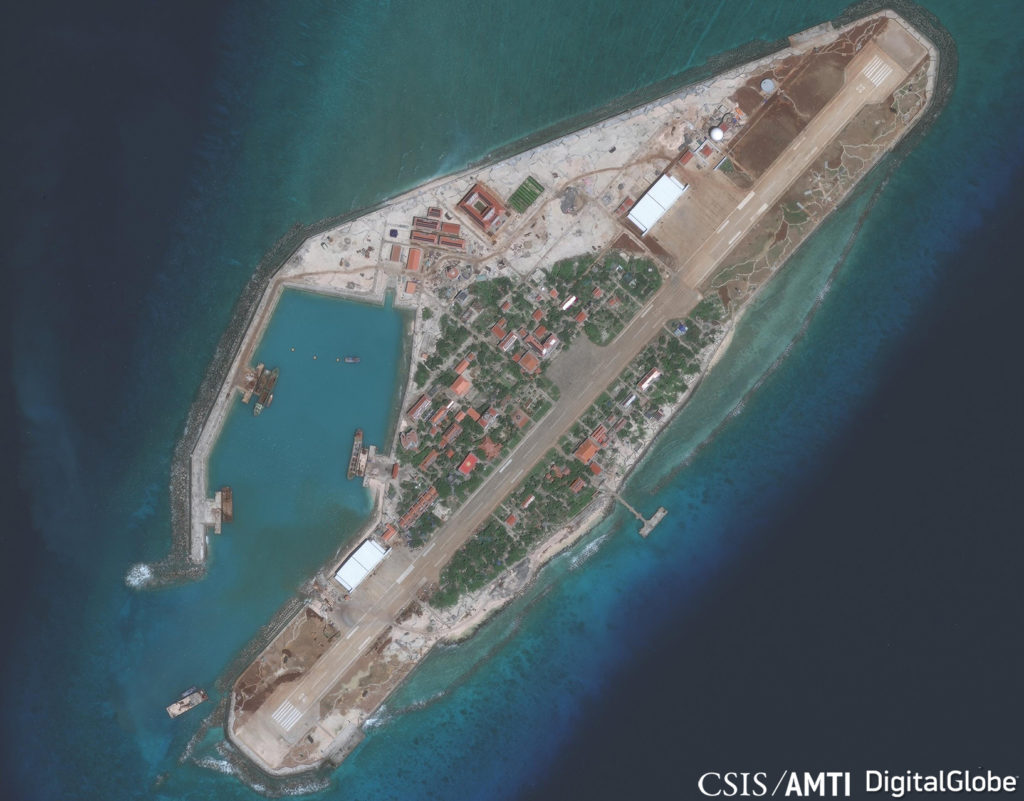 “Vietnam continues to quietly upgrade its facilities in the Spratly Islands, though apparently without facing the same reaction from China’s maritime militia forces as the Philippines recently has,” the AMTI said in an update dated Monday, April 8, and emailed to subscribers on Wednesday, April 10.

AMTI, which is part of the Center for Strategic and International Studies, noted that Vietnam “occupies 49 outposts spread across 27 features in the vicinity of the Spratly Islands.”

The think tank said Vietnam “undertook an expansion” in the Spratlys “to extend its small runway and create a protected harbor.” Vietnam “created about 40 acres of new land” through “the use of construction equipment to dredge up part of the reef surrounding the island and cover it in sand.”

“This process was more time-consuming and less environmentally disastrous than the methods used for China’s industrial-scale dredging and landfill at its facilities in the Spratlys, but still involved the intentional destruction of coral reef,” AMTI said.

Vietnam’s upgrades included the finishing touches on an airstrip, construction of communications facilities, and drainage channels.

“It seems that regardless of external factors, whether amid negotiations and relative calm or tensions and threats of violence, Hanoi is committed to a steady but modest expansion of its capabilities in and around the Spratly Islands,” AMTI said.

“Vietnam has not attempted to engage in the same large-scale militarization of its features as China; there is no sign of facilities built to house attack aircraft, for instance. Instead, Hanoi’s upgrades seem geared toward expanding its ability to monitor and patrol contested waters and, especially in the case of its pillbox and DK1 platforms, improve living conditions and ensure it can resupply by air if necessary,” it added.

In a message to Rappler on Wednesday evening, AMTI director Gregory Poling said: “It wouldn’t be surprising if Manila filed a protest against some Vietnamese activities, for instance at Spratly Island. Vietnam does the same when the Philippines does certain things in the Spratlys. That is about establishing a record of non-compliance with the other’s claims.”

“But again, it’s a whole different issue than the changes to the status quo orchestrated by Beijing, which present a clear threat to Filipino access to disputed waters,” Poling said.

He added, “It should also be noted that many of Vietnam’s upgrades are in underwater areas to the southwest that are not part of Kalayaan Islands claimed by Manila. Only Beijing and Taipei pretend those underwater features are part of the Spratlys.”

AMTI earlier noted “initial Philippine efforts to start runway repairs” on Pag-asa Island in May 2018. In response, the think tank said China deployed its maritime militia to the vicinity of Pag-asa Island.

Philippine President Rodrigo Duterte said last Thursday, April 4, that he will not allow China to occupy Pag-asa Island, while the Philippine Department of Foreign Affairs said the presence of Chinese militia there is “illegal.” Critics however said Duterte’s friendliness toward China has led to an increase in China’s incursions in the West Philippine Sea. – Rappler.com