Apr 11, 2019 4:06 PM PHT
Jodesz Gavilan
Facebook Twitter Copy URL
Copied
'This we strongly protest because they are violating our rights as health workers to work and function as health workers, to serve the people whom we are duty-bound to serve,' says Dr Edelina dela Paz, Health Action for Human Rights chairperson 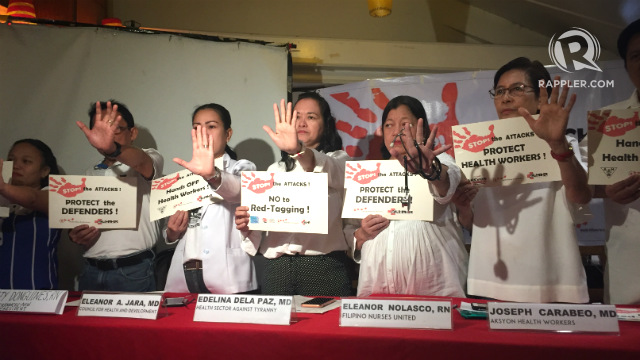 MANILA, Philippines – Health workers’ groups on Thursday, April 11, slammed the government for branding one of their own as a communist front, saying this exposes their members to even more harassment and attacks.

The groups made the statement in after National Security Adviser Hermogenes Esperon Jr included the Alliance of Health Workers (AHW) in a list of non-governmental organizations accused of fronting for the Communist Party of the Philippines (CPP).

In a press conference on Thursday, Cristy Donguines of AHW–Jose Reyes Memorial Medical Center detailed her experience of harassment even before AHW was red-tagged by the government.

Donguines shared how some people who identified themselves as police went to their workplace and conducted surveillance.

Dr Edelina dela Paz, HAHR chairperson and HealthSTAT co-convenor, warned of the consequences of the “irresponsible and malicious propaganda” linking health workers to the CPP.

She cited the number of health workers killed and the overall culture of impunity in the country as soldiers “get orders from a President who does not respect human rights.”

“This we strongly protest because they are violating our rights as health workers to work and function as health workers, to serve the people whom we are duty-bound to serve,” Dela Paz added.

Several health workers had received death threats through text messages while doctors and other health workers stationed in faraway places would often get their photos taken and trailed by unknown individuals, according to eports from AHW and CHD.

Dr Eleanor Jara of CHD said such harassment was uncalled for, considering their sacrifices.

(Health workers serve wholeheartedly and they stay in their jobs despite low salaries because they love what they are doing. They want to serve our countrymen who are in need. Stop tagging them as communists. They are only serving.)

Esperon, in a letter, asked the European Union to stop funding NGOs on the government list, claiming that they were being used to recruit for the CPP.

Human rights groups have consistently denounced the government for red-tagging, profiling, and surveillance. In March 2018, the Department of Justice sought to tag several activists and leaders of progressive groups as terrorists.

Eleanor Nolasco of Filipino Nurses United said they remained unfazed amid such threats.