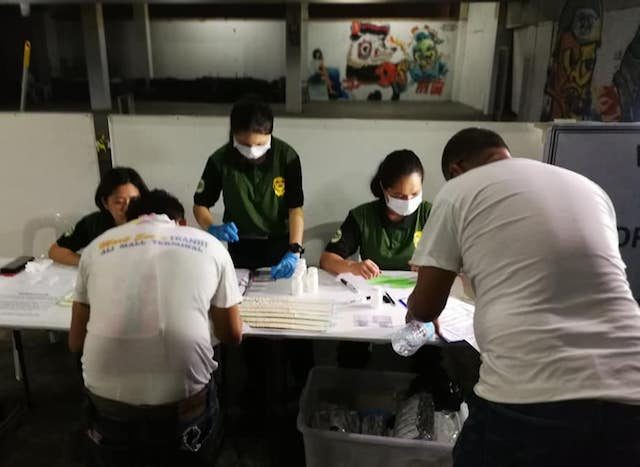 Facebook Twitter Copy URL
Copied
There are 36 bus drivers, 17 conductors, and one dispatcher who test positive for shabu

MANILA, Philippines – Some 7,729 transportation hub workers underwent drug tests on Monday, April 15, as part of the Philippine Drug Enforcement Agency (PDEA)’s Oplan Huli Week, a play on the observance of Holy Week in the country.

A total of 54 tested positive for illegal drugs, among them 36 bus drivers, 17 conductors, and one dispatcher. (IN PHOTOS: From churches to jails, Filipinos mark Palm Sunday 2019)

In a statement, PDEA chief Director General Aaron Aquino said the drug tests were necessary to ensure the safety of Filipinos traveling to and from their provinces for the Holy Week break. “We are also doing this to curb incidents of vehicular accidents caused by drugged drivers and make the roads safer, especially on occasions when there are [many] travelers going to provinces for vacation,” Aquino said.

Aside from the drug tests, the PDEA also conducted anti-narcotics sweeps with its K-9 units in transportation terminals to ensure no illegal drugs were hidden inside passengers’ luggage. (READ: Want to adopt a K9? Look at these PDEA dogs)

Oplan Huli Week is the third installment of the PDEA’s holiday drug test drives, following Oplan Undaspot in October 2018 which saw the testing of 848 transportation hub workers, and Oplan Harabas in March 2019, where 4,470 drivers were screened for illegal drugs. – Rappler.com