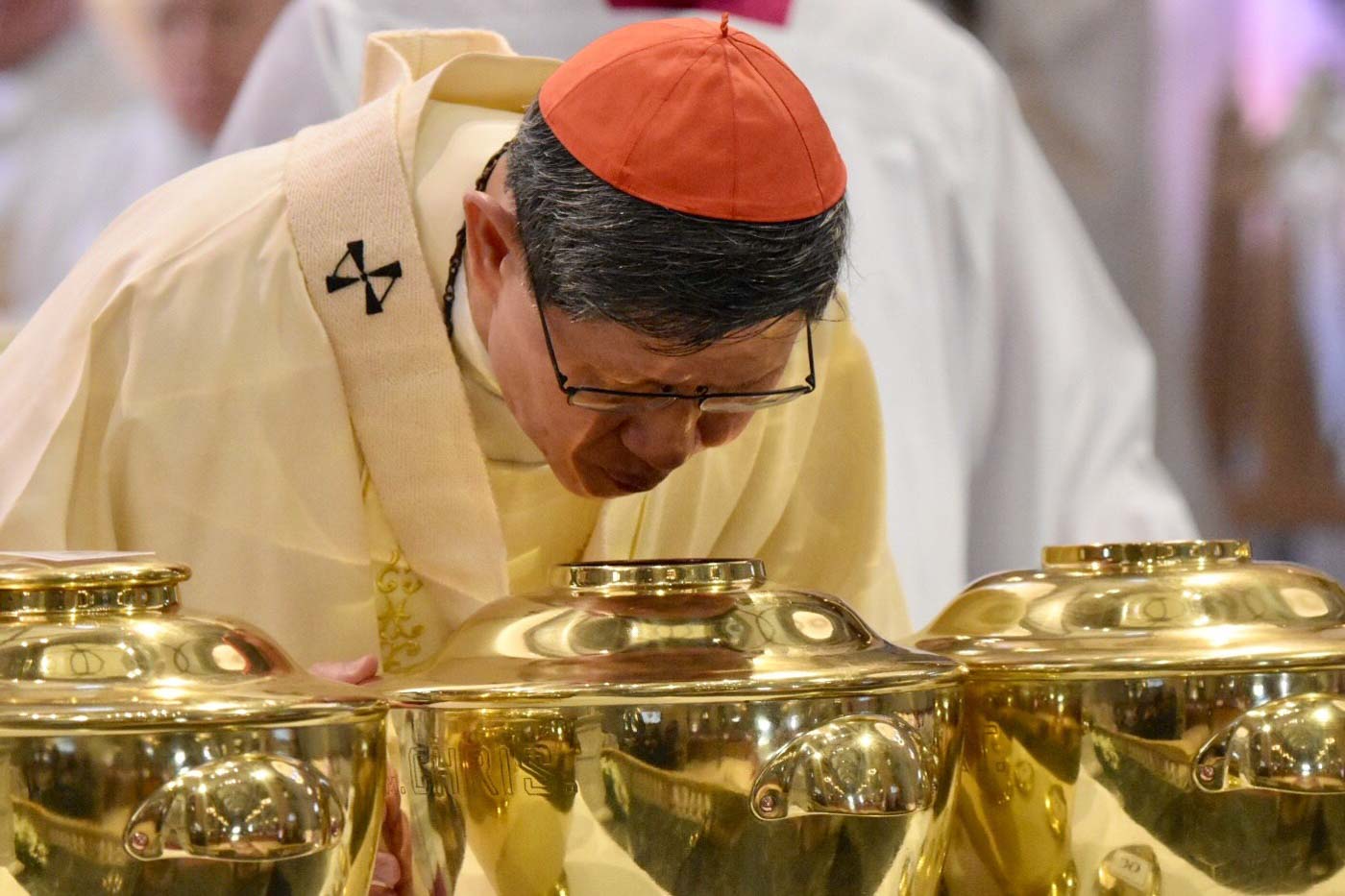 MANILA, Philippines – Manila Archbishop Luis Antonio Cardinal Tagle warned Catholics on Holy Thursday, April 18, against addiction to their cell phones, saying it is a form of slavery and a subtle kind of “imprisonment.”

(We have many different forms of imprisonment, and I pity our young people. They don’t know they’re being imprisoned, being enslaved.)

The 61-year-old cardinal cited cell phone addiction as an example. The way people answer cell phones, he said in allusion, is like the way the prophet Samuel answered God in the Bible.

(It seems to be guarding us always. When it rings, it makes us go, “Yes Lord, speak Lord, I am here.” But when it’s the Lord who speaks, sometimes we do not listen, but with our cell phones we’re always on our toes.)

(Why is it that we’re becoming slaves? And those enslaving us continue to earn money. Every year, your cell phone model gets obsolete, and you buy a new one. And you buy and buy, and those imprisoning us become richer and richer.)

“Our imprisonments are very subtle,” the Jesuit-trained Tagle pointed out. “That’s why the spirit is given to us, the spirit of wisdom and discernment, in order to detect, ‘Am I still free for God?'”

Tagle also criticized Catholics who use their cell phones during Mass.

He recounted a time when a Catholic, who was kneeling in front, answered his cell phone during consecration – the highest point of the Mass, when Catholics believe that bread and wine become the real body and blood of Christ.

Tagle, who was already holding the host for consecration, said he controlled his emotions.

“Pero sa loob loob ko (Deep within me), it is the real presence of Christ. ‘But still I will obey the phone,'” he said.

Tagle’s homilies on Holy Thursday focused on the youth, as it is the Year of the Youth in the Philippine Catholic Church. While criticizing fake news and hate speech, Tagle also reminded those in power to guide and love the youth, and not to abuse them.

Pope: Cell phones can be ‘drugs’

Like Tagle, Pope Francis recently warned the youth against cell phone addiction, according to the Catholic News Service.

In a speech before high school students on April 13, Francis said, “Please, free yourselves from your phone addiction!”

“Mobile phones are a great help, it marks great progress. It should be used, and it is wonderful everyone knows how to use it,” the 82-year-old Francis said. “But when you become a slave to your phone, you lose your freedom.”

“Be careful because there is danger that this drug – when the phone is a drug – the danger of communication being reduced to simple ‘contacts,'” Francis said.

The Pope urged the youth to practice “healthy introspection,” and set their conscience apart “from the voices of selfishness and hedonism.” – Rappler.com