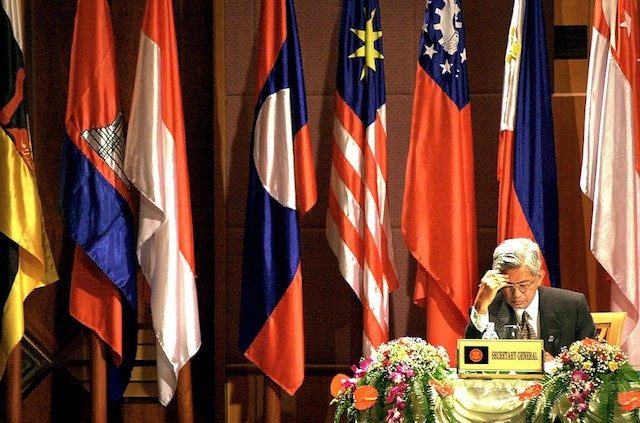 MANILA, Philippines – Diplomats on Saturday, April 20, paid tribute to former ambassador Rodolfo Severino Jr who died at the age of 82, describing him as a “giant of a man” and a “generous mentor” to people who had the privilege of working with him.

“His passing is an immeasurable loss to the #ASEANCommunity,” the Association of Southeast Asian Nations (ASEAN) said in a statement on Twitter on Saturday.

Severino served as ASEAN Secretary-General from 1998 to 2002, one of only two Filipinos to hold the position.

We are deeply saddened to know that Amb. Rodolfo C. Severino Jr., former Secretary-General of #ASEAN (1998-2002) passed away yesterday, April 19.  His passing is an immeasurable loss to the #ASEANCommunity. We convey our sincere condolences to his family. pic.twitter.com/aBvRV4k8Ni

Choi Shing-Kwok, Director of the Institute of Southeast Asian Studies-Yusof Ishak Institute, cited the “stellar contributions” of Severino to ASEAN.

“As the inaugural head of the ASEAN Studies Centre at ISEAS from 2008 to 2015, Mr Severino held a special place in the hearts and minds of researchers and staff at the ISEAS-Yusof Ishak Institute. His leadership and stellar contributions to ASEAN will be long remembered and sorely missed,” Choi said.

The European Union Mission to ASEAN also expressed its condolences to the Severino family.

Before he served as ASEAN secretary-general, Severino was a member of the Philippine foreign service, where he began his career in 1965 and served for 32 years.

He ended his career at the Philippine Department of Foreign Affairs as undersecretary for policy in 1997 – to begin his new post at ASEAN – but not without leaving a legacy as an invaluable mentor whose lessons continue to be passed on to new members of the foreign service.

In his tribute to Severino on his Facebook page on Saturday, Philippine Chargé d’Affaires to Libya Elmer Cato shared that he did not get to serve under Severino as he joined the DFA a year after Severino’s retirement.

“Despite this, I still consider myself fortunate as I was able to learn from those among us who he had mentored. I also benefited from the work he left us, including our Manual of Style that the journalist in him just had to put together,” he said.

On the times he did meet Severino, Cato said he “came to know why he was well-loved and respected.”

“He was a giant of a man. I am honored to have known him,” he added.

In the comments thread of Cato’s post, former ambassador Jose dela Rosa Burgos wrote that Severino “indeed…was an exemplar in his career and a generous mentor for those he had worked” with.

In the same thread, former ambassador Victoria Bataclan said in Filipino that Severino “served country above all.”

Ambassador J Eduardo Malaya took to Twitter to honor Severino, whom he described as “an exemplary diplomat, prolific author, and a public intellectual.”

He cited an excerpt of Severino’s interview featured in the book Frontlines of Diplomacy: Conversations with Philippine Ambassadors, where he was asked for advice to young diplomats: “One is integrity. Do not ever do dishonest things, like stealing from the government. Another is to be realistic and view the world as it is and view the Philippines as it is without wishful thinking.”

Before he became a diplomat, Severino was a journalist and perhaps because of this background, complemented by his professionalism in dealing with the media –  he was known to respond to all questions without losing his cool – he became a favored source of journalists who covered the foreign service. (READ: [OPINION: Remembering ‘Amba’ Rod Severino)

Nirmal Ghosh, who used to be the Straits Times’ Manila correspondent, described Severino as “a friend to journalists covering the region,” in a tweet on Saturday following the diplomat’s death.

Severino was the first guest of the Move.Ph Facebook page (which later evolved into Rappler) in a Tweetview  held in September 2011, on the impact of Wikileaks to journalists. Severino joined the conversation via video chat from Singapore, where he headed the ASEAN Studies Centre at ISEAS.  – Rappler.com