“This is the most important issue that we face in our lives,” said Dr Cora Claudio, president of EARTH Institute Asia, Inc, told Rappler’s #talkthursday on March 8. She’s compiling a soon-to-be-published book outlining the hazards ahead. A Stanford PhD and TOWNS (The Outstanding Women in the Nations Service) awardee, she is adamant that climate change can “wipe us out.”

She points to a map of the Philippines with a color-coded guide to different areas. Yellow is relatively safe. The redder it gets, the more vulnerable it becomes. There is no yellow in the Philippines, which is nearly completely red. 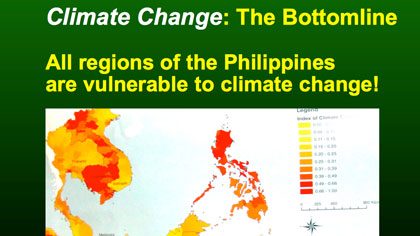 “We are very vulnerable,” said Claudio.  “A small degree in rise of temperature in these waters can really affect us disastrously.”

She’s echoed by Antonia Loyzaga, executive director of the Manila Observatory, who joined our conversation from Vancouver, Canada, where she is presenting at a conference on coastal cities and climate change.

“The Philippines ranks #3 in terms of the world’s most at-risk countries, and this has to do with institutional capacity to adapt to the future impact of climate change,” Loyzaga said.

Pushing education and awareness of government institutions has been a longtime goal of Sen Loren Legarda. She is the principal author of the Philippines’ laws on climate change and is one of the principal movers of a campaign to devolve the laws into actionable plans for local governments.

“It’s a survival issue. It’s so unjust that we Filipinos bear the brunt of disasters,” she said, pointing out that the Philippines produces less than 1% of the world’s carbon dioxide emissions responsible for the greenhouse effect, which is raising global temperatures, melting the polar icecaps leading to rising ocean levels.

“The US and China combined account for more than 40% of the world’s CO2 emissions, but we Filipinos bear the brunt. Climate change adaptation is important.”

All 3 claimed climate change is a women’s issue, pointing out the discussion #talkthursday took place on International Women’s Day.

“Every which way you look at it, this is a woman’s issue,” said Legarda. “Women run the risk of dying from disasters 14 times more than men. We are really more vulnerable because of our physical frame, because of our nutritional needs, because perhaps we are caregivers, we go back and get hold of our children or want to get as much from our homes.”

Loyzaga characterized those who are most at risk based on “poverty, sources of income, as well as gender and our children.”

She said more than 15 million Filipinos live in the most vulnerable areas, what she called “low elevation coastal zones.” These areas are deep red in Claudio’s map.

Loyzaga said the Manila Observatory is studying extreme weather events like tropical cyclones and typhoons. “We look particularly at central Philipines and northern Mindanao – looking at it in terms of the change in the trajectory of tropical cyclones in that they seem to be actually crossing the central Philippines more often than in our past.”

Typhoon Sendong, which hit Cagayan de Oro and Iligan cities last December, followed a surprising trajectory.  According to Legarda, if there had been adequate preparation, most of the casualties could have been prevented.

“Sendong, with 1,200 lives lost, I think, could have been 200 lives lost … if we were prepared, if early warning systems were in place, if people followed LGUs (local government units) and moved them away,” said Legarda.  “Like the sandbar in CDO, which was a no-man’s zone. They should not have been living there, but they were living there!  So people perished.”

The 3 spoke about a monumental collective task ahead: an educational campaign that must translate to practical risk assessments, action plans and community drills.

“We need to provide local technical and scientific resources, knowledge, technologies in terms of strengthening local capacity as far as meeting the challenges of climate change,” said Loyzaga.

“Not everyone understands or prioritizes it,” added Legarda. “We distribute disaster preparedness manuals.”  You can find that manual here. Claudio said everyone needs to take action and introduced an acronym: SIMBI – Start In My Backyard.  “There are four areas,” she said.

“One is energy consumption. Two is water conservation. The third is solid waste management, and four is the way we decide our purchasing decisions. We have to look at how we’re attending to these subjects, and everyone should help. This is a shared responsibility.”

The reality though is that few Filipinos seem interested in climate change.

Legarda was forceful in saying this must become a national priority.

All 3 women presented action plans. Along with the UN and AUSAID, Legarda is holding a series of regional workshops for “effective disaster risk reduction and climate change adaptation” – with the kickoff forum set in Quezon City on March 16.

She is teaming up with Claudio and other TOWNS scientists, who plan to hold roundtable dialogues to raise awareness and create action plans. Loyzaga said it’s important to involve all stakeholders for an institutional response.

The key, they agree, is to build each local government’s concrete plans which should be translated at the barangay level.

“If we’re able to match our efforts with the local governments’ capacity-building at the local level, that will, of course, translate to national capacity,” said Loyzaga.

“It is a cross-cutting issue that affects the food we eat, the water we drink… and our very lives,” said Legarda. “It’s a matter of survival and the greatest humanitarian challenge of all times.” – Rappler.com