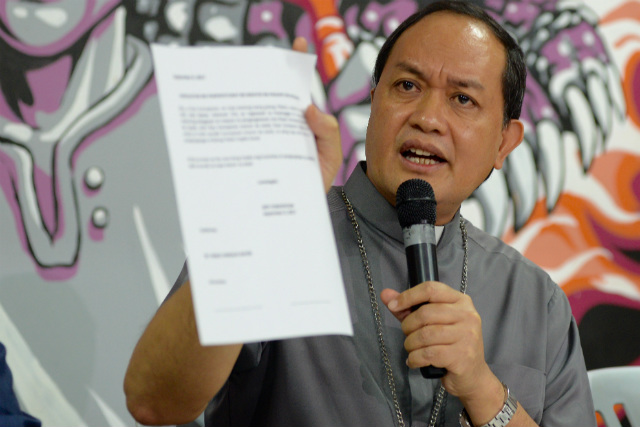 “The biggest lie is that this drug war is meant to eradicate illegal drugs,” said David in a live interview with Rappler’s Patricia Evangelista, who asked him about the biggest lie he has heard in the past 3 years.

David, 60, vice president of the Catholic Bishops’ Conference of the Philippines, is one of the staunchest critics of Duterte’s anti-drug campaign. He is also one of the priests who have received death threats under Duterte’s watch.

David on Monday spoke in a studio conversation with Evangelista, which was conducted in a remote location.

The interview was aired live during the Disinformation and Democratic Decay forum at the University of the Philippines Bonifacio Global City campus. The forum was organized by the Consortium on Democracy and Disinformation.

David earlier explained why he believes there is no “drug war” being waged.

“There is no war against illegal drugs, because the supply is not being stopped. If they are really after illegal drugs, they would go after the big people, the manufacturers, the smugglers, the suppliers. But instead, they go after the victims of these people. So, I have come to the conclusion that this war on illegal drugs is illegal, immoral, and anti-poor,” David said, as quoted by the National Catholic Reporter on February 19.

In his interview on Monday, David also talked about planted evidence and false testimonies against drug suspects, as well as the need for due process.

“I call attention to the way they arrest people. You don’t call it an invitation when you barge into the homes of people, and you arrest people without warrant,” he said.

David voiced concern, too, about the support of many Catholics who back Duterte’s bloody drug war. Evangelista, who has extensively covered the drug war, had cited her interviews with vigilantes “who call themselves good Catholics,” who “go to church on Sunday and commit murder during the week.”

“I say with all humility that it means that we have failed, that we have failed to educate consciences,” said David, a leading Bible scholar who holds a doctorate in sacred theology from the Catholic University of Louvain, Belgium.

“We’ve failed in establishing connections between faith and life, that people can live a split-level kind of Christianity, that people can compartmentalize religion and social life, and see nothing wrong about things like these and at the same time claim to be believers, claim to be Christians,” he said.

David said this is unfortunate “especially now that we’re celebrating the Easter season.”

“We’ve just renewed our vows at baptism, and the most important vow at baptism is to say ‘I renounce evil.’ How can we even claim to be believers in a Trinitarian God if we’re not of capable of renouncing evil in all its rawness? And what I observe all around is really raw evil,” he said.

Evangelista later asked David about priests who support drug war killings. She mentioned her recent interview with a Catholic parish priest who said of the recent killings of politicians, “if God couldn’t stop them, maybe a bullet will.”

“That would be extremely embarrassing because the Catholic Bishops’ Conference of the Philippines is very clear about its stand against killings,” David said. “I cannot, for the life of me, imagine a priest even thinking that things like this could be right.” – Rappler.com