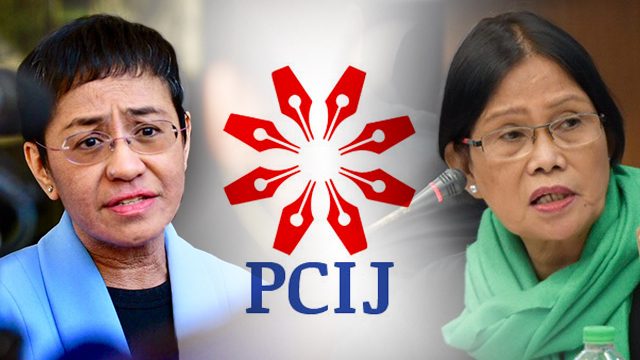 Facebook Twitter Copy URL
Copied
Tordesillas says that 'if this is the kind of intelligence report that the President gets and bases his actions and policies on, the country is in big trouble'

MANILA, Philippines – News heads Maria Ressa of Rappler and Ellen Tordesillas of Vera Files on Monday, April 22, slammed the government over a matrix linking them and other journalists to an alleged plot to oust President Rodrigo Duterte.

Aside from Rappler and Vera Files, the Philippine Center for Investigative Journalism (PCIJ) was also implicated in the matrix.

Malacañang had revealed that the “Oust-Duterte” matrix published in The Manila Times was based on the same questionable intelligence report received by Duterte and the same information that the Palace was supposed to reveal on Monday.

Rappler CEO Ressa called the report, which contained a web-like matrix implicating journalists and lawyers, “garbage” and said it is “another Palace ploy to harass journalists.”

“It’s embarrassing for supposed ‘intelligence’ using i2 analyst notebook software to make fantasies look plausible. Go back to the drawing board. I’ve worked with many good folks in PH intelligence. Sad to see them reduced to garbage. Yet another Palace ploy to harass journalists,” Ressa tweeted.

Ressa denied receiving an e-mail from Vera Files’ Tordesillas, as claimed by the report.

“It’s bad when the government lies through its paid PR to manipulate its people. They should also get it through their heads that I do not run day-to-day editorial. It’s been years since Ellen and I have even emailed each other. Good God,” Ressa said.

Tordesillas denied all allegations and said these were “downright false.”

“It’s hilarious. But what I find disturbing is, if this is the kind of intelligence report that the President gets and bases his actions and policies on, the country is in big trouble,” Tordesillas said.

PCIJ on report: Wrong on so many points

PCIJ denied links to such plot, saying the report is “wrong on many points.”

In a statement, PCIJ said it has never received any email from Tordesillas on the so-called narco list video of Bikoy, the anonymous witness in a viral video that linked Duterte’s family to illegal drugs.

“The video was posted on YouTube from where the news media and citizens got to watch it. That is where the so-called ‘cybercrime experts’ of the unnamed ‘highly placed source in the Office of the President’ should look instead,” PCIJ said.

The news agency also questioned how the supposed information was obtained, saying The Manila Times story “offers tacit admission that these ‘experts,’ apparently working with the Office of the President, had invaded the privacy of the emails and correspondence of journalists now being singled out.”

Furthermore, PCIJ said the matrix implicated 5 persons who are no longer working for them.

Rappler, for its part, criticized the false report, saying it is an example of “how not to write an investigative report or even straight news.”

“The Manila Times under Dante Ang, appointed special envoy for international public relations by President Rodrigo Duterte, is the reason why journalism schools and newsrooms in the country should be actively educating the youth and communities on what truthful, responsible and ethical journalism is,” Rappler said in a statement.

Aside from the 3 news groups, the National Union of People’s Lawyers (NUPL) was likewise included in the matrix, which the human rights law group also slammed as “putrid rubbish.”

These organizations were critical of President Duterte’s policies, especially his brutal campaign against illegal drugs that has resulted in thousands of extrajudicial killings. – Rappler.com