‘Democracy is sick, truth the only antidote’ – Morales 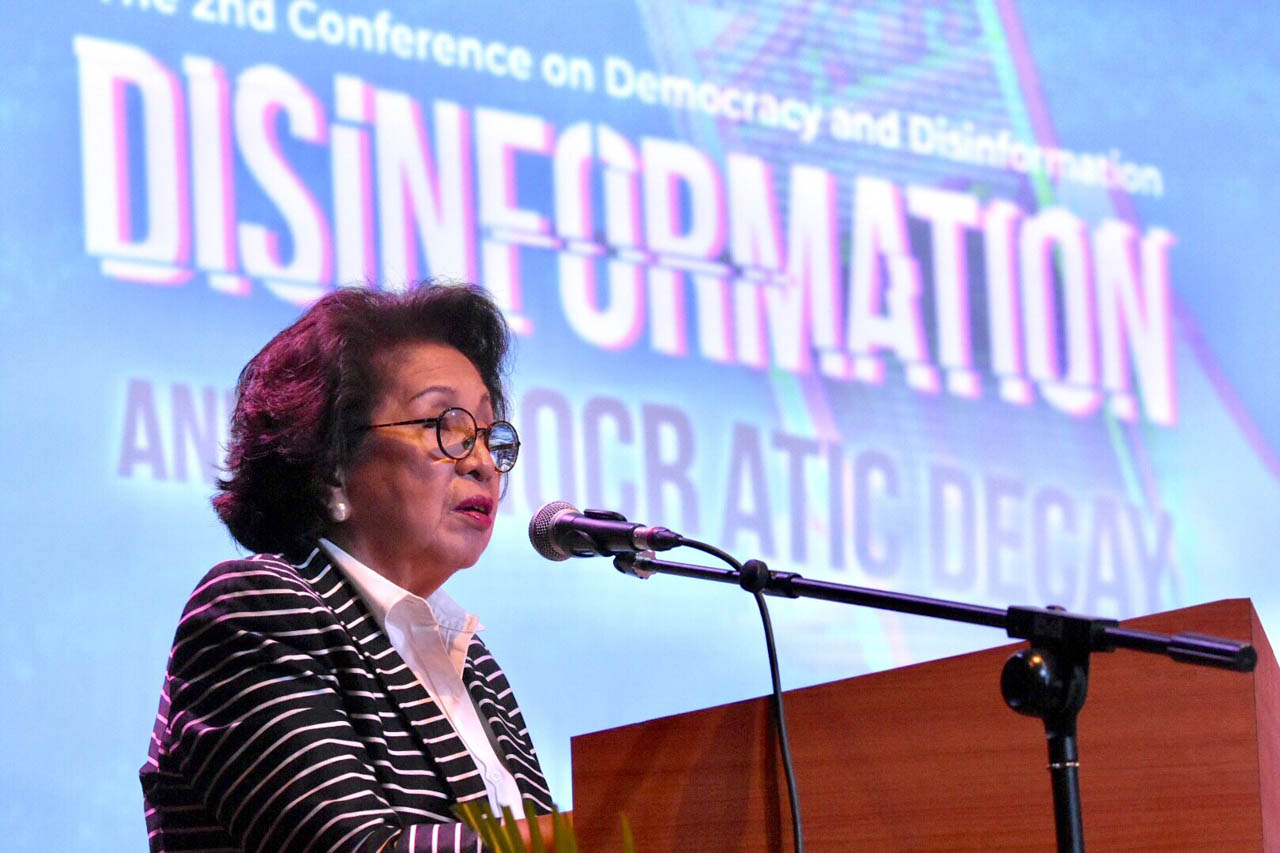 MANILA, Philippines – Describing facts as “the most lethal of all weapons” in the post-truth era, former ombudsman Conchita Carpio Morales pushed for more robust truth-telling as the “only antidote” to a sick democracy.

“Our democracy is sick, and truth-telling is the only antidote,” Morales said on Monday, April 22, during the Disinformation and Democratic Decay forum at the University of the Philippines in Bonifacio Global City.

To illustrate the “democratic deficit” in the Philippines, Morales alluded to former senators Ramon “Bong” Revilla Jr and Jinggoy Estrada.

The former ombudsman questioned why they continue to lead in the senatorial race despite having faced plunder cases in connection with the pork barrel scam. The anti-graft court Sandiganbayan had acquitted Revilla of plunder, while Estrada is out on bail.

Morales said truth “should be weaponized to the full extent of shaming” candidates linked to corruption.

Monday’s forum was organized by the Consortium on Democracy and Disinformation, which includes leading news outlets, non-governmental organizations, and the academe.

Facts ‘the most lethal of weapons’

“I am aware that your consortium is made up of soldiers of truth who possess the most lethal of all weapons in today’s post-truth era: facts – reliable, timely, and unfailing facts,” Morales said.

“Because of these, you have become, individually and as part of your respective organizations, enemy number one to the purveyors of fairy tales and lies lurking in our midst,” she added.

She later pointed out that the Philippines’ democratic quotient “has turned from bad to worse.” This shows the urgency “for us to stand up in front of the mirror with lights on now.”

A former Supreme Court justice, Morales said she is in fact “inclined to conclude that the balance has tilted against the judicial branch.”

“The absence of checks and balances mechanisms, plus a timid press, present a clear and present danger to democracy. One just has to rule by fear and intimidation to impose tyranny,” Morales said.

In the near future, she said that an “inconvenient truth” is that the May 13 elections “may again be a manifestation of our people’s political literacy.”

“I am reminded that among the front runners in the senatorial election are some ex-senators whom I’d rather see faulted than elected. How could we miss the logic why people would still elect them?” the feisty former ombudsman said.

“Apart from the promises of moons and stars and other ridiculous forms of entertainment, the people are just as perplexed as many political pundits why they remain scot-free and, worse, qualified political candidates in spite of their mayhem, to say the least,” she added.

Morales stressed the need to shame these controversial candidates.

“Arguably, the truth should be weaponized to the full extent of shaming these candidates and their enablers to prevent them from running, if the wheels of justice seem derailed or too slow to catch them,” she said.

Morales then appealed to the Consortium on Democracy and Disinformation “to hold steadfast to your most essential goals.”

“Pursue, defend, and protect the truth even if many others have chosen to do otherwise. Find the truth, and expose the lies,” Morales said.

Before Morales spoke, Caloocan Bishop Pablo Virgilio David joined the forum through a live video from a remote location. David, the keynote speaker, sat down for a live studio interview with Rappler’s Patricia Evangelista.

“The biggest lie is that this drug war is meant to eradicate illegal drugs,” David told Evangelista, who asked him about the biggest lie he has heard in the past 3 years.

“Disinformation has become a full-time job in the age of social media,” David said. “That is why we need to talk about the truth.”

He added: “We never seek the truth alone. We always do it as part of a community of truth seekers.” – Rappler.com