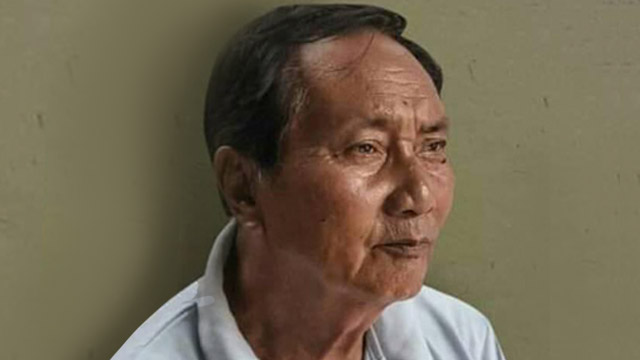 NEGROS OCCIDENTAL, Philippines (UPDATED) – A reelectionist councilor of Escalante City who worked with human rights groups in this province was shot dead on Monday afternoon, April 22.

Human rights advocate Bernardino Patigas, 72, was on his way home when he was waylaid and shot by a lone gunman in Barangay Alimango.

Patigas, a former secretary-general of the Northern Negros Alliance of Human Rights (NNAHRA), fell and was shot again by the suspect.

Police Captain Ronald Santillan, deputy chief of the Escalante City Police Station, said Patigas died on the spot due to head injuries and other gunshot wounds.

Authorities have yet to establish the motive of the incident, whether it was election-related or not.

Patigas was among the personalities featured in a poster  of supposed communist-linked individuals allegedly disseminated by the military in a Negros Occidental town early last year. Another personality in the poster, human rights lawyer Benjamin Ramos, was killed in November 2018.

Patigas is also known as a survivor of the 1985 Escalante massacre which killed 20 people after the state forces opened fired at the protesters in front of the city hall.

Groups condemned his murder and demanded justice for Patigas, among them the National Federation of Sugar Workers and the Concerned Artists of the Philippines.

In a statement, CAP noted how being an eyewitness to the Escalante massacre did not deter Patigas from his human rights advocacy.

“He was in his mid-30s then, but this experience of trauma during did not deter him from his advocacy as a public servant, coordinator of Bayan Muna partylist, and former Secretary-General of the Northern Negros Alliance for Human Rights,” it said.