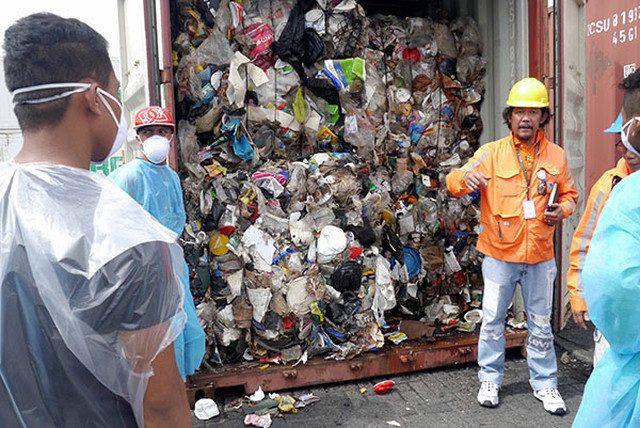 MANILA, Philippines (UPDATED) – Philippine President Rodrigo Duterte wants to send back garbage to Canada as he slammed the western country for turning the Philippines into a “dumpsite.”

“‘Yung basura ng Canada, I want a boat prepared. I give a warning to Canada, maybe next week, they better pull their thing up or I will set sail sa Canada, ibuhos ko basura nila doon,” Duterte said on Tuesday, April 23 in San Fernando, Pampanga.

(The garbage of Canada, I want a boat prepared. I give a warning to Canada, maybe next week, they better pull their thing up or I will set sail to Canada, I will pour their garbage there.)

He was addressing Cabinet officials and Pampanga local executives during the last minutes of a situation briefing on the 6.1-magnitude earthquake that rocked Luzon.

Duterte said he would declare “war” against Canada over the mounds of trash and that the country should prepare a grand welcome for the garbage.

“I’ll declare war against them, isauli ko talaga tingnan mo (I will really return that, you’ll see), karga mo ‘yan sa barko, load it to a ship and advise Canada, I will advise Canada that your garbage, prepare a grand reception. Eat it if you want to,” Duterte said.

In another part of his tirade, he ordered that the container vans of Canadian garbage be poured into the Canadian embassy in Makati.

Duterte falsely accused Canada of offering educational grants in exchange for the Philippines allowing their garbage to be dumped on Philippine soil. Canadian Prime Minister Justin Trudeau, however, has emphasized that the trash was brought to the Philippines illegally by a private importer, not their government.

“They extend these educational grants but on condition that we will accept their shit and their garbage,” said Duterte.

The Chief Executive also threatened to fire Bureau of Customs personnel who allow Canada garbage to enter the country.

“Next week, this Customs, next time they do it, I will sack all of them. It’s not Jagger’s fault, this issue is old. I told Jagger to send them back,” Duterte said in a mix of English and Filipino.

Tons of Canadian garbage smuggled into the Philippines by private importers has been a long-festering diplomatic issue, starting from the presidency of Benigno Aquino III.

It began in 2013 when 1,300 tons of waste materials were illegally shipped by Ontario-based company Chronic Incorporated to the Philippines.

Despite fierce outcry from environmentalists, Canada has refused to bring the garbage back to Canadian soil, citing a lack of authority to compel the private shipper to return the garbage to the country. – Rappler.com