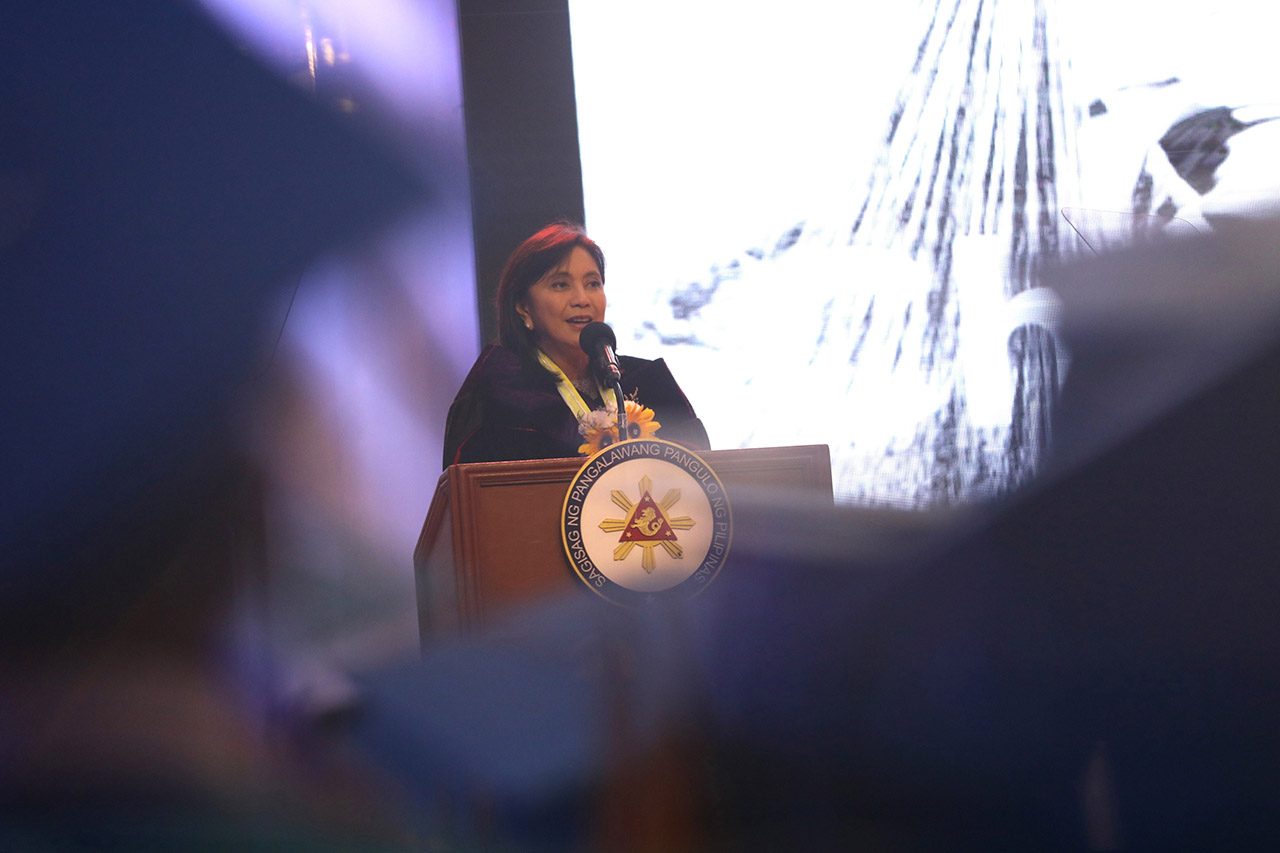 MANILA, Philippines (UPDATED) – Vice President Leni Robredo said the government should not be publicizing matrices alleging plots to remove President Rodrigo Duterte from power, especially if the information there are unproven.

Reporters asked the Vice President in Marawi City on Tuesday, April 23, to react to the matrix published by The Manila Times, linking journalists and human rights lawyers to an alleged plot to oust Duterte. Malacañang said the President himself was the source of this matrix.

(They didn’t give any explanation as to how these ended up in the matrix. That’s why we always take information like this with a grain of salt. But, for me, they should not release things like this that are not validated, because a lot of people’s reputation will be affected.)

(As I said, this isn’t the first time that a matrix was released. And the first one they released was not valid, because my supposed involvement there is not true. So the likelihood of this to be unreliable as well is very high.)

Police chief General Oscar Albayalde already said the police will investigate the journalists and the lawyers in the matrix, without waiting for an official order from Malacañang. But Justice Secretary Menardo Guevera said there is no basis “for now” to probe into the matter.

This isn’t the first time the government claimed there is an ouster plot against the President.

Duterte himself has repeatedly accused the once-ruling Liberal Party, which Robredo chairs, of plotting against him.

The Vice President has been denying this, arguing the LP neither has the money nor the machinery for such an operation.

Senator Leila de Lima said the alleged plot was “Mr Dante Ang’s and Malacañang’s latest attempt at making fools out of the media and the people stupid enough to believe their fairy tales.”

“This latest matrix just makes everything absurd. It doesn’t even offer a plausible theory on how the plot is supposed to work,” the fierce Duterte critic said in a statement on Wednesday, April 24.

“It is clear that the intent is to smear the reputation of the persons named in the matrix and not at all to raise the alarm on any danger to our country. Klarong panglilihis na naman ito sa mga exposé na kinakasangkutan ng pamilya Duterte – the PCIJ report on the unexplained spike of their wealth and the ‘Bikoy’ exposé on their and Bong Go’s alleged involvement in the illegal drug trade,” she added.

De Lima stressed that investigative reports on alleged corruption, and moves by lawyers to seek justice for their clients are not acts of sedition.

(It is the duty of journalists to investigate if the President, his family, and his allies commit crimes. Lawyers have the duty to seek justice. Fighting abuses of the government is not sedition. It’s being Filipino.)

The senator said that given this, the “Oust Duterte” matrix should be “treated like every other garbage that comes from the Malacañang’s propaganda machine.”

“Put it in the dump with the other useless and senseless meanderings from the madman that is our President,” she said, adding that the President had yet to produce a “proper and credible matrix.”

De Lima cited previous matrices the Dutertes had released to the public, one linking her to the illegal drugs trade in the New Bilibid Prison, which she had repeatedly denied. The senator marked her  second year in detention in February, as she faced trial for what she called trumped-up drug charges.

“The first couple of matrices were somewhat interesting if only for the fact that they were not grounded on any discernible intelligence effort. As a matter of fact, no law enforcement or intel unit was willing to own those matrices,” she said.

In 2018, presidential son Paolo Duterte had also posted a much-reviled matrix of personalities and institutions allegedly out to destabilize the government. Among those in that matrix were Catholic bishops including Bishop Julio Xavier Labayen, who died weeks before the 2016 elections; Duterte supporter Carmen Pedrosa; and Jollibee. (READ: What do Leni Robredo and Jollibee have in common?) – Rappler.com