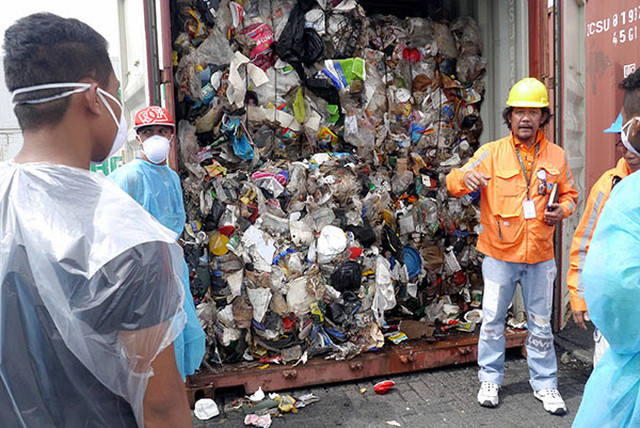 MANILA, Philippines (UPDATED) – Canada vowed to work with the Philippines in resolving a garbage issue between the two countries after President Rodrigo Duterte threatened to declare “war” over Canada’s trash that had been dumped in his country.

“Canada is strongly committed to collaborating with the government of the Philippines to resolve this issue and is aware of the court decision ordering the importer to ship the material back to Canada,” said the Canadian embassy in a statement on Wednesday, April 24.

“A joint technical working group, consisting of officials from both countries, is examining the full spectrum of issues related to the removal of the waste with a view to a timely resolution,” the embassy added.

On Wednesday, Canadian Environment Minister Catherine McKenna said a solution to the problem might be ready “in the coming weeks.”

She also indicated that threats aren’t the way to go, according to a CBC report. “We also need to do this in a positive way. That’s certainly the way we’re going forward. It has been a file that’s been going for a while. We’re very close to finding a solution,” she said.

Duterte on Tuesday, April 23, slammed Canada for turning the Philippines into a “dumpsite.”

“‘Yung basura ng Canada, I want a boat prepared. I give a warning to Canada, maybe next week, they better pull their thing up or I will set sail sa Canada, ibuhos ko basura nila doon,” Duterte said in San Fernando City, Pampanga, on Tuesday.

(The garbage of Canada, I want a boat prepared. I give a warning to Canada, maybe next week, they better pull their thing up or I will set sail to Canada, I will pour their garbage there.)

The Canadian garbage smuggled into the Philippines by private importers has been a long-festering diplomatic issue, starting from the presidency of Benigno Aquino III.

Despite fierce outcry from environmentalists, Canada has refused to bring the garbage back to Canadian soil, citing a lack of authority to compel the private shipper to return the garbage to the country. (READ: Illegal garbage dispute: Why can’t Canada be like Japan?)

In its statement on Wednesday, Canada explained that in 2016, it “amended its regulations around hazardous waste shipments to prevent such events from happening again.”

“We are committed to working collaboratively with the government of the Philippines to ensure the material is processed in an environmentally responsible way,” the Canadian embassy said.

The embassy also pointed out that the Philippines and Canada “are celebrating 70 years of diplomatic relations” this year.

“The relationship is built on strong people-to-people ties, our common interest in strengthening political, economic, and cultural relations, and in our mutual commitment to peace,” Canada added. – with reports from Pia Ranada/Rappler.com