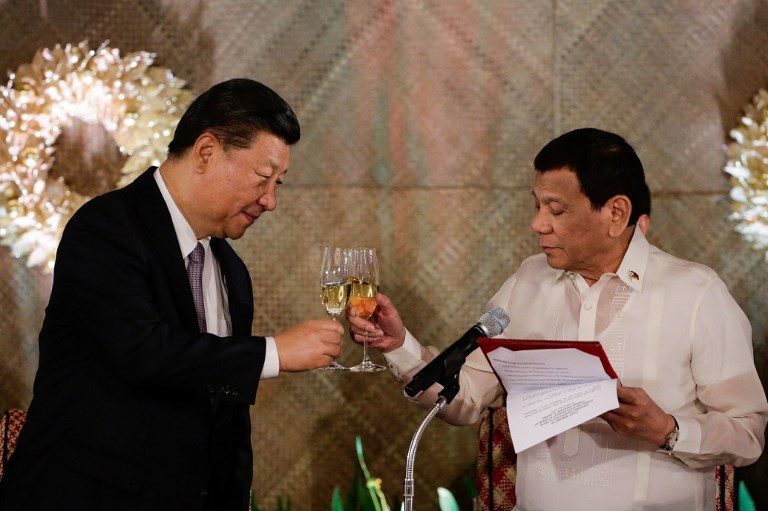 MANILA, Philippines – Philippine President Rodrigo Duterte departed for Beijing on Wednesday, April 24, to meet with Chinese President Xi Jinping and attend the second Belt and Road Forum with other heads of state.

Duterte’s plane took off from Villamor Airbase in Pasay City before 4 pm and was set to arrive at the Beijing International Airport around dinner time.

His official activities will begin on Thursday, April 25, with a bilateral meeting with  Xi, followed by a meeting with Premier Li Keqiang.

Duterte’s dialogue with China’s top two will take place amid questions back home about China loans for the Chico River and Kaliwa Dam projects, reports of Chinese militia near Pag-asa Island, and gathering of giant clams by Chinese fishermen.

Philippine Ambassador to China Chito Sta Romana said that the West Philippine Sea dispute will likely be discussed during the leaders’ meetings.

This will be Duterte’s second time to attend the Belt and Road Forum, China’s way of showcasing its efforts to fund infrastructure projects of other nations in order to improve connectivity and trade along a modern-day “Silk Road.”

This will also be Duterte’s 4th visit to China during his presidency,  beginning with a state visit in October 2016, the first Belt and Road Forum in May 2017, and the Boao Forum in April 2018.

On Friday, April 26, Duterte will attend the opening ceremony of the second Belt and Road Forum in the morning, at the China National Convention Center, followed by high-level meetings and lunch.

That same day, he will meet with Chinese businessmen and will witness the exchange of business agreements.

The forum continues on Saturday, April 27, with a Leaders’ Roundtable Session. Duterte will depart for Davao City that evening.

The Department of Trade and Industry estimates that the Philippines would seal at least $10 billion in deals and investments during the President’s latest China trip.

Duterte would be visiting China as he and his administration continued to be criticized for their overly friendly stance towards China despite the regional giant’s actions in the West Philippine Sea (South China Sea).

Such moves include the presence of Chinese ships around Pag-asa Island, with over 600 vessels monitored to have circled the area since January, and the building of a rescue center on Kagitingan Reef (Fiery Cross Reef) in the West Philippine Sea,  well within the Philippines’ exclusive economic zone (EEZ). (TEXT: Summary of ruling on Philippines-China case)

Chinese fishermen were also found to have harvested endangered giant clams in Panatag (Scarborough Shoal), which Foreign Secretary Teodoro Locsin Jr had said the Philippines would act on. – Rappler.com