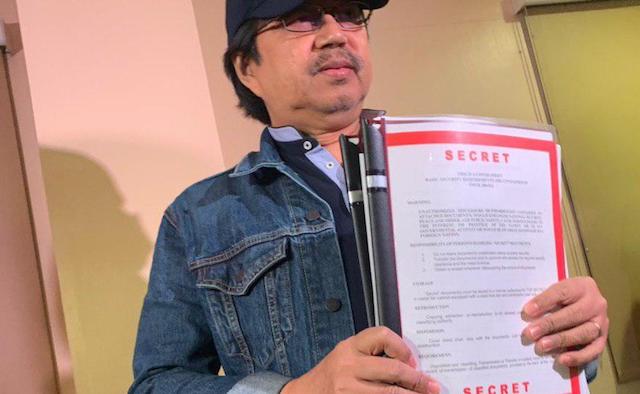 “We have trackers from the CIDG,” Albayalde said in a chance interview with reporters in Camp Crame.

This means that aside from local police who have received the arrest warrant, the CIDG will also search for Acierto, who was ordered arrested by a Manila court for his alleged involvement in the drug importation in connection with the two magnetic lifters intercepted at the Manila International Container Port in 2018.

The CIDG boosts the search considerably as its agents are especially trained for tracking down high-profile suspects, and they also are free from the day-to-day duties of local cops like patrols and checkpoints. (READ: Duterte signs law licensing PNP chief, CIDG execs to issue subpoenas)

The stakes are high for the PNP in making this arrest, especially since Acierto accused President Rodrigo Duterte and top police and anti-drug officials of blocking his investigation into former presidential adviser Michael Yang.

Acierto is banking his accusations on his almost two decades of experience in arresting drug suspects under the PNP’s anti-drug units. The President and the PNP have been discrediting Acierto, saying he himself is involved in the illegal drug trade. (READ: Ex-cop Acierto speaks out: Duterte, PNP ignored intel on Michael Yang’s drug links)

Albayalde himself was named by Acierto as one of the generals who was informed about the alleged drug links of Michael Yang, but that Albayalde failed to relay the information to Malacañang.

Aquino earlier told Rappler that Malacañang has already cleared Yang. The PDEA and the PNP, meanwhile, have said that their investigation on Yang continues. – Rappler.com