Apr 26, 2019 4:41 PM PHT
Sofia Tomacruz
Facebook Twitter Copy URL
Copied
'All of us here are so proud of your ability to shine a light and we’re all going to do everything we can to make sure it stays allowed for you,' says American actor and businessman George Clooney 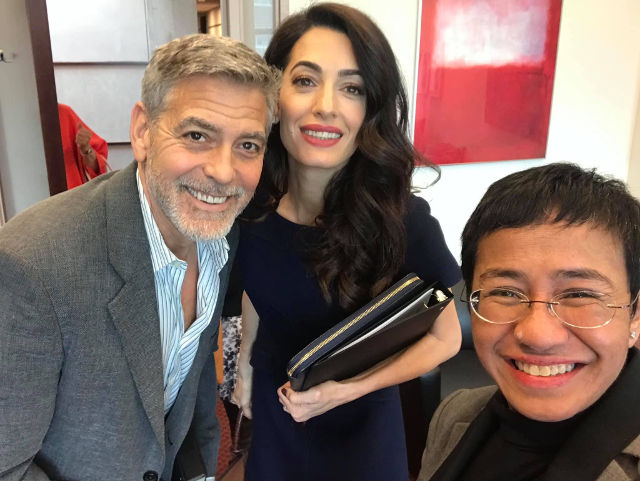 MANILA, Philippines – Speaking before a room filled with global leaders, rights advocates, and lawyers, American actor and businessman George Clooney threw his support for Rappler CEO and executive editor Maria Ressa as he vowed to do “everything” to ensure journalists in the Philippines continued their jobs.

Clooney made the remarks on Thursday night, April 25, at the launch of TrialWatch, a Clooney Foundation for Justice Project.

During the event, the actor expressed solidarity with Ressa, saying she was brave for returning to the Philippines where she risked arrest over a string of cases lodged against her.

Scanning the crowd for Ressa, Clooney said, “Maria is about to risk going back and she’s going back because she believes that shining a light on crime – shining a light in general, is the best and most important thing. And she won’t be afraid.”

He added, “I’m afraid for her and all of us here are so proud of your ability to shine a light and we’re all going to do everything we can to make sure it stays allowed for you,” as the room broke into applause. (LIST: Cases vs Maria Ressa, Rappler directors, staff since 2018)

Ressa is facing a string of cases in the Philippines as the Duterte administration slams Rappler for its critical coverage. Ressa has since posted bail 8 times and has been arrested twice. (READ: Maria Ressa urges journalists: Join battle vs attempts to stifle press freedom)

For the project, the Clooney Foundation for justice partnered with the Office of the United Nations High Commissioner for Human Rights, the American Bar Association, Columbia Law School, and Microsoft Corporation.

The project sets out to to do the following: