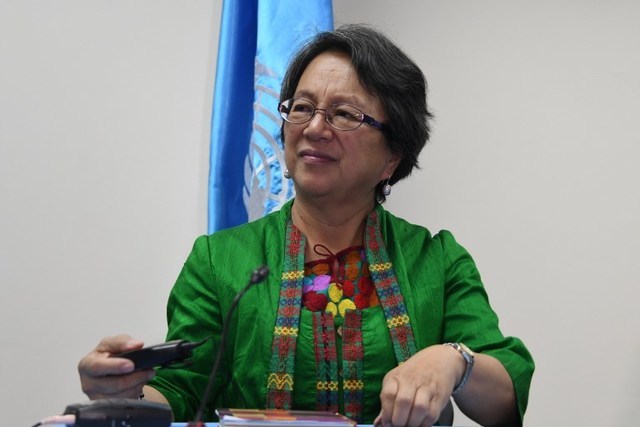 MANILA, Philippines – Three United Nations experts on Wednesday, May 1, condemned the continuous attacks and allegations linking one of their own to the Communist Party of the Philippines (CPP).

The UN special rapporteurs are the following:

“We call on the Philippine Government to immediately stop these unacceptable attacks on the human rights work of Corpuz, and to ensure her physical safety,” they said, adding that the accusations are “without grounding in fact or law.”

UN experts added that the threats and harassment hinder the groups from doing their vital work. (READ: Powering through a crisis: Defending human rights under Duterte)

“The criminalizing discourse used by Philippine public officials undermines the value of the vital work of human rights defenders, denigrates them in the eyes of the public and may put them at risk of threats, violence or other forms of harassment,” they said.

Brigadier General Antonio Parlade Jr had earlier claimed that the UN was infiltrated by the CPP through Corpuz, a veteran Filipino human rights worker.

(They have an IP rapporteur there and that rapporteur, she’s in the list filed before the court tagging the Communist Party as a terrorist organization.)

Corpuz was indeed one of 649 people the Department of Justice sought to tag as terrorists in 2018. The Manila Regional Trial Court (RTC) Branch 19, however, eventually cleared her and 3 others.

Parlade’s statement was in line with the government’s offensive against progressive groups that they alleged were fronts for the CPP.

National Security Adviser Hermogenes Esperon Jr shad written the European Union, asking it to stop funding non-governmental organizations on the government list, claiming that they were being used to recruit for the CPP.

Human rights groups have denounced the government for red-tagging, profiling, and surveillance. – Rappler.com