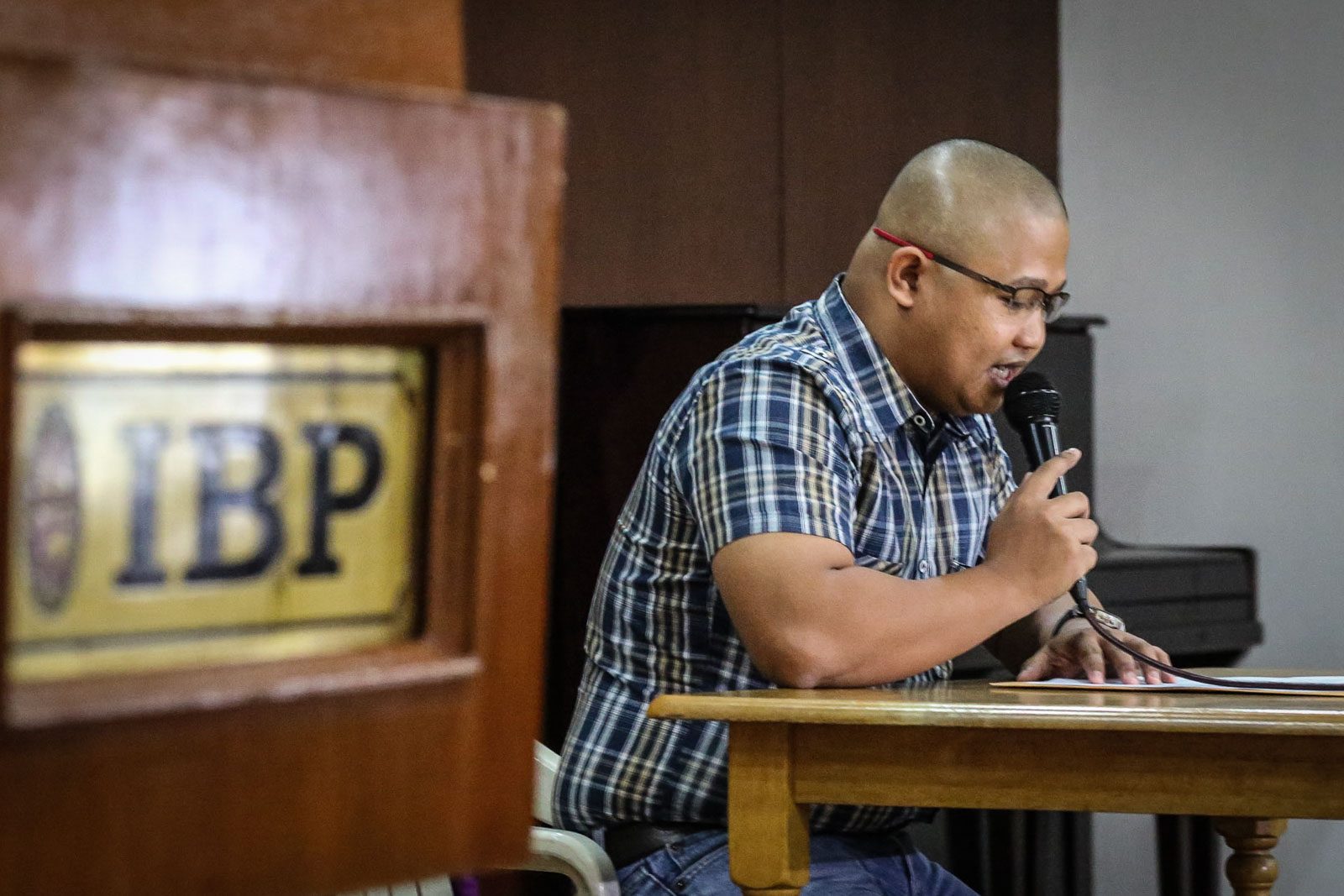 Facebook Twitter Copy URL
Copied
'Mr Advincula may not be provided free legal assistance based on the standards provided for in the National Center for Legal Aid Manual of Operations in approving such requests,' says the IBP

MANILA, Philippines – One more setback for the already tough road ahead for Peter Joemel Advincula, alias Bikoy, as the Integrated Bar of the Philippines (IBP) declined his request for legal aid to sue presidential son Paolo Duterte and the President’s most trusted aide Bong Go.

“The Integrated Bar of the Philippines through its National Center for Legal Aid (NCLA) is declining the request for free legal assistance made by Peter Joemel Advincula (Bikoy). This decision was reached after a thorough evaluation of his application was conducted by the NCLA,” said IBP national president Abdiel Dan Fajardo in a statement on Wednesday, May 8.

After months of hiding followng the release of his online videos that tagged the younger Duterte, Go, and presidential son-in-law Manases Carpio to the illegal drug trade, Advincula surfaced Monday, May 6, at the IBP headquarters in Pasig.

Fajardo said on Monday that Advincula showed up in their office, and was received like any other person coming to the IBP for legal assistance.

“His application was duly processed just like any other request received by the NCLA. The NCLA has determined that Mr Advincula may not be provided free legal assistance based on the standards provided for in the NCLA Manual of Operations in approving such requests,” Fajardo said.

The NCLA is the legal aid arm of the IBP.

Fajardo has not replied as of writing to Rappler’s follow-up question on the specific provisions in the manual that were not satisfied, and which became the basis for rejecting Advincula’s request.

“In the pursuit of its mandate to provide access to justice to the poor and the marginalized, the IBP cannot be seen to be siding with or going against any candidate or political party,” Fajardo said.

Advincula, an ex-seminarian and a former convict now turned whistle-blower, is in hiding and has begged Senator Panfilo Lacson to postpone until the elections the Senate investigation into his claims.

Advincula was invited by Lacson, chairman of the Senate committee on public order and dangerous drugs, to attend a hearing on Friday morning, May 10.

(They can make a scenario case against me on Friday. I wouldn’t be able to get out of the Senate on Saturday, Sunday, up to Monday.)

It was NCLA head June Ambrosio who mostly faced the media on Monday when Advincula read a two-page prepared statement. Fajardo came after to clarify that the press conference was not arranged by the IBP.

On Tuesday, May 7, the IBP Davao chapter expectedly slammed the acts of its national chapter, and said: “Bikoy’s storyline is polluted and its source comes from the very mouth of an alleged suborner himself. The IBP Davao City Chapter does not and will not tolerate any statements from the present leadership of the IBP National that will result in politicizing the organization,” said the Davao chapter.

By afternoon of Tuesday, the Board of Governors of the IBP collectively came out with a statement clarifying that Advincula is in its custody.

“The presence of media outfits was not upon the invitation nor direction of the IBP. IBP did not craft Mr. Advincula’s statement, and/or sworn statement,” said the Board of Governors.

Fajardo remains the national president, but he will soon be replaced by current executive vice president Domingo Egon Cayosa.

The IBP under Fajardo’s leadership has stood strong against some actions of the Duterte government. Once asked to respond to IBP chapters disowning his statements, Fajardo just said that they are elected officers of the organization. – Rappler.com