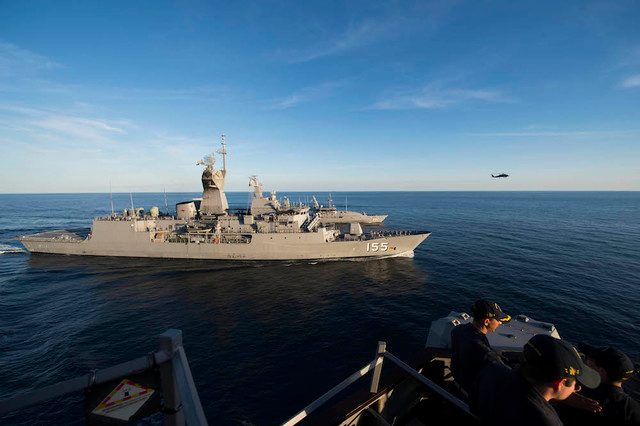 MANILA, Philippines – The United States will continue sailing in the South China Sea despite the opposition of China, US Navy chief Admiral John Richardson said on Thursday, May 16.

Speaking to reporters in a teleconference from Tokyo, Japan, Richardson said their fleets’ freedom of navigation will continue despite opposition from China.

“The United States Navy has been consistently present in the South China Sea for 70 years. Our operations there have really not fluctuated much over those 7 decades, including in recent times. And so we’ll consistently be present. We have [a] tremendous amount of national interest,” Richardson said.

This comes after the US Navy was slammed by the Chinese government for sailing in May close to Gaven and Chigua reefs in the Spratly Islands, which Beijing calls Nansha.

China also rebuked the US in February after it sent two ships through the Taiwan Strait. The pass-by was seen by China as a breach of its sovereignty. The US, however, disputed this, saying they were simply sailing through international waters.

Richardson stressed that the operations are all consistent with the United Nations Convention on the Law of the Sea. It’s under the same convention that a Hague tribunal ruled in 2016 that China’s excessive claims in the South China Sea were illegal.

“We do this around the entire world, and the operations a dozen or so of these throughout the world, including contesting the excessive maritime claims of even our allies and partners,” Richardson added.

In early May too, navies from the Philippines, United States, India, and Japan flexed their muscles in the disputed South China Sea after coming together for the ASEAN-Plus Defense Ministers’ Meeting Maritime Security Field Training Exercise. (IN PHOTOS: PH, U.S., Japan, India flex muscles in South China Sea)

Rest assured, Richardson said, the operations were not intended to be “provocative” to the Chinese in any way. As the US Navy and Filipino fishermen have seen, however, Chinese sea forces are easily provoked. – Rappler.com