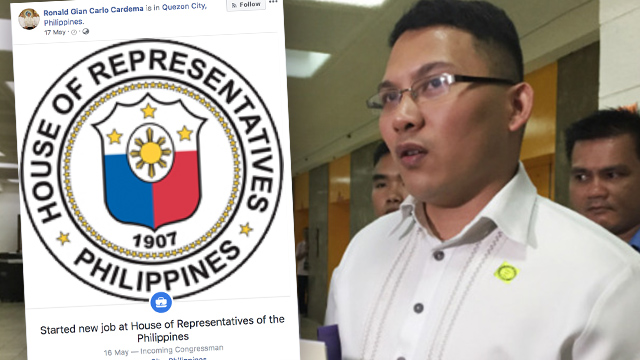 The proclamation of winning senators and party-list organizations in the 2019 elections has yet to take place, but it seems that some are already eager to declare themselves winners.

Through a public ‘life update’ on his official Facebook page, Duterte Youth Chairman Ronald Cardema labeled himself an “incoming Congressman” in the House of Representatives.

This, despite the Commission on Elections (Comelec) en banc still having to release a decision on his petition for substitution as the party-list group’s nominee. (READ: On Duterte Youth Cardema’s bid for substitution: Questions for Comelec)

“The substitution of Cardema has not yet been approved,” Comelec Commissioner Rowena Guanzon said in a tweet on Monday, May 20.

Details from Facebook showed that Cardema posted the update on Sunday, May 19, though it was dated to reflect it as instead being posted on Friday, May 17. 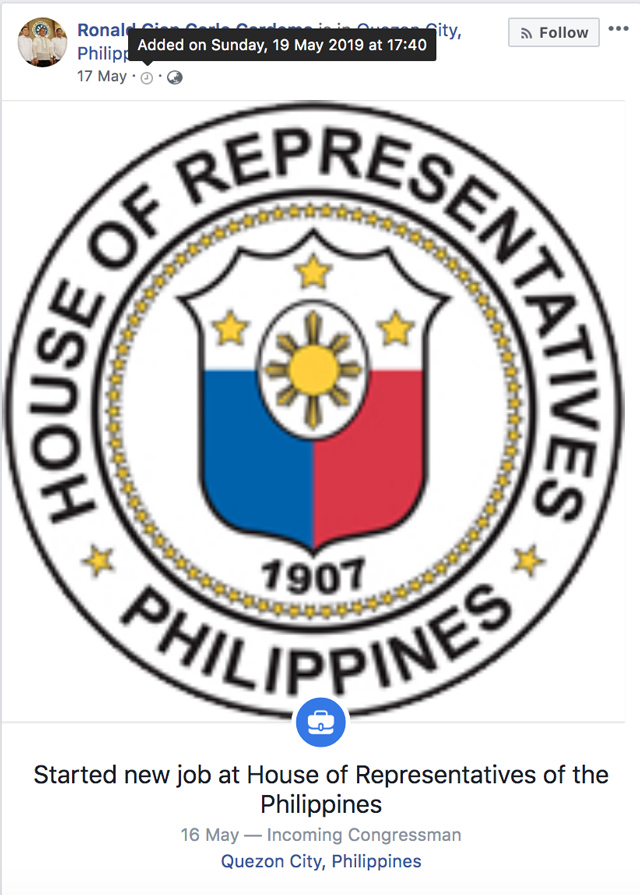 Cardema’s latest life update comes after he filed a petition for substitution as Duterte Youth party-list nominee on the eve of elections on Sunday, May 12. Cardema filed the petition after all 5 of the party-list group’s nominees withdrew from the party-list race.

The life update was greeted by hundreds congratulating him for the supposed win, which actually still remains up in the air.

Reactions from Facebook users who shared the post also ranged from congratulatory posts from his supporters, to angry netizens describing it as a brazen move, and those saying Cardema was too “excited” to assume the post.

The life update is only one of several on Cardema’s Facebook page.

For this position, he seemed willing to wait, however. Details on Facebook showed Cardema posted the update on August 31, 2018, or two days after he took his oath as the youth commission chair on August 29, 2018.

Whatever the outcome of Cardema’s bid, in the age of social media, one thing is certain: once it’s online, it’s on the internet forever. – Rappler.com