May 23, 2019 9:19 PM PHT
Carmela Fonbuena
Facebook Twitter Copy URL
Copied
The future BRP Jose Rizal is transferred to the water for the first time during a launching ceremony at the Hyundai Heavy Industries shipyard in Ulsan, South Korea 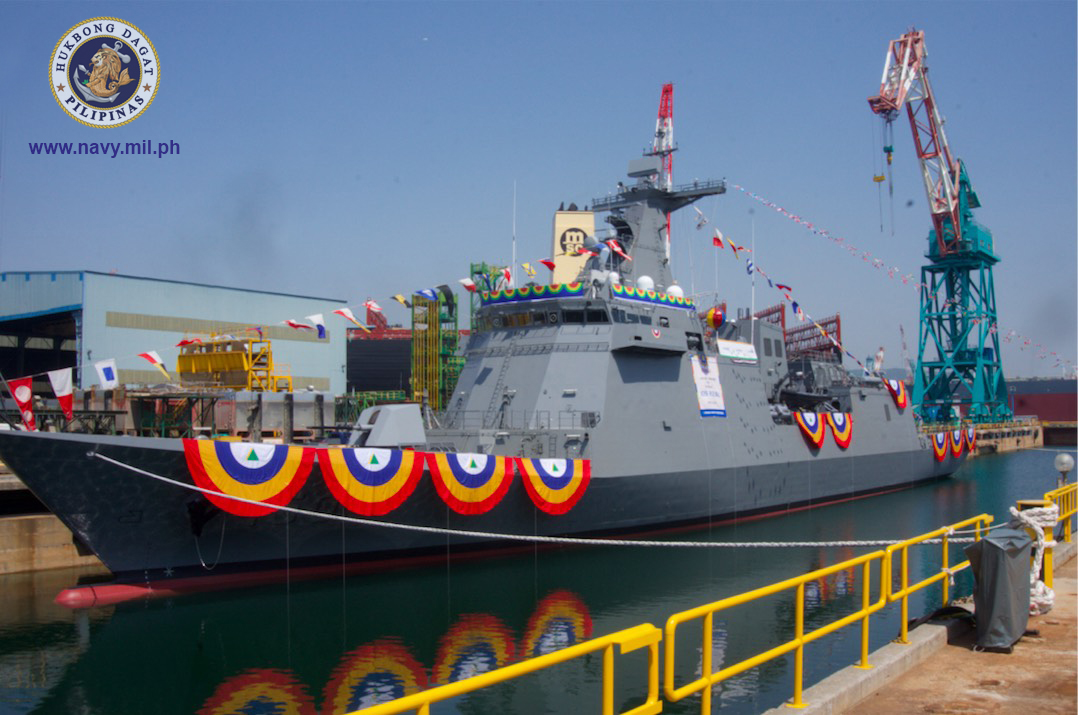 MANILA, Philippines – The Philippine Navy’s first ever missile-capable warship, the future BRP Jose Rizal, hit the water on Thursday, May 23, during a launching ceremony in South Korea.

Armed Forces of the Philippines chief of staff General Benjamin Madrigal Jr joined navy officials and defense beat reporters who were invited to witness the ceremony at the shipyard of Hyundai Heavy Industries in Ulsan. Defense Undersecretary Raymundo Elefante was also present.

The 107-meter long frigate will be fitted with anti-air warfare, anti-surface warfare, anti-submarine warfare, and electronic warfare operations capabilities. It has a maximum speed of 25 knots and can stay at sea for 30 days.

“These ships are fully equipped with Surface to Air and Surface to Surface Missiles, torpedoes, launchers, and weapon systems for four-dimensional warfare,” Navy spokesman Captain Jonathan Zata said in a statement.

“The Philippine Navy’s desire for acquiring state-of-the-art and highly capable warships is soon within reach. It further provides leverage for the navy’s bid of becoming stronger and more credible force that the Philippines as a maritime nation can be proud of,” Zata said.

It’s a much needed boost to the Philippine fleet as it faces increasingly volatile maritime dispute with China over the West Philippine Sea (South China Sea). The archipelagic country had relied for years on hand-me-down assets from the US, its treaty ally.

The navy’s current most capable warships are former Hamilton-class cutters from the US Coast Guard.

The Philippines acquired two units of the frigate from Hyundai Heavy Industries in 2016, under the aggressive military modernizaton program funded by the former Aquino administration. It costs P16 billion and is one of two big-ticket projects under the fund, along with a squadron of 12 fighter trainer jets that cost P18 billion.

The keel laying ceremony for the second frigate, the future BRP Antonio Luna, coincided with the launching ceremony of the first unit.

The frigates are expected in the Philippines by September 2020 and March 2021, respectively.

The excitement for the arrival of brand new frigates was tainted by controversies surrounding the acquisition project, however.

Disagreements over systems to be installed in the warship caused the surprise removal in December 2017 of then Philippine Navy chief Vice Admiral Ronald Mercado. He was accused of insubordination after he insisted on installing the combat management system (CMS) from supplier Tacticos Thales.

The CMS serves as the “brain” of the warship, consolidating data from all of its sensors. Tacticos Thales was the CMS unanimously preferred by the Philippine Navy leadership, many of them citing in off-the-record conversations its proven compatibility to the systems of allied navies.

Hyundai Heavy Industries insisted on its “sole right,” based on the contract, and chose to install the CMS of fellow South Korean supplier Hanwha Systems. Mercado sought to dispute the contract, but the Department of National Defense eventually favored the shipbuilder. (TIMELINE: PH Navy’s P15.7-billion frigates acquisition project)

In the middle of disagreements between the navy and the defense department, the office of then special assistant to the President Christopher “Bong” Go called the navy to a meeting to discuss the CMS selection.

It was then Rear Admiral Robert Empedrad, as chief of the technical working group for the frigates acquisition project, who attended the meeting in Malacañang. He is now the chief of the Philippine Navy.

Senators previously suggested the possibility of additional funding to give the Navy the CMS it preferred. – Rappler.com