Duterte sits out diploma distribution of PMA Class of 2019 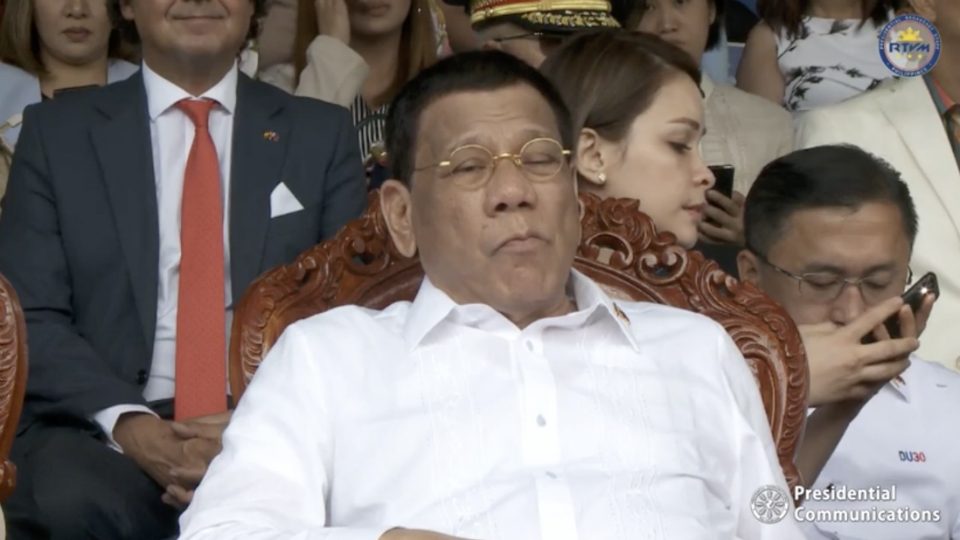 MANILA, Philippines – President Rodrigo Duterte, commander-in-chief of the military, mostly sat out the distribution of diplomas to Philippine Military Academy (PMA) Mabalasik Class of 2019 graduates, the first time since he assumed office.

On Sunday, May 26, Duterte handed out diplomas to only two out of the 261 cadets graduating that day.

Duterte stood to give Cadet 1st Class Dionne Mea Umalla, the valedictorian of her class, her diploma, the presidential saber, and a certificate of ownership to a house and lot.

The President stood up again to award last ranking cadet 1st Class Danmark Solomon his diploma and a caliber .45 pistol.

Duterte’s graduation speech lasted for about 8 minutes on Sunday. The signing of pardon of punishment to underclassmen lasted for another 6 minutes. (READ: Duterte cracks rape jokes as he pardons PMA cadets)

In a text message to Rappler, PMA spokesperson Major Reynan Afan said they do not know why the President sat out the diploma distribution.

“We are not aware of the reason. But as per practice, it is the prerogative of [the] most senior or presider of the ceremony to delegate the task to the next senior, who was at that time the [defense secretary],” Afan told Rappler.

In previous commencement exercises, Duterte handed out the diploma for all graduating cadets.

The Inquirer reported that Sunday’s event was delayed for almost two hours, with the ceremonies scheduled to start at 9 am. The President arrived at around 10:55 am.

A week before, Malacañang neither confirmed nor denied the rumors that the President visited Cardinal Santos Medical Center in San Juan City.

Duterte was out of the public eye for about a week after he was seen voting on May 13. – Rappler.com