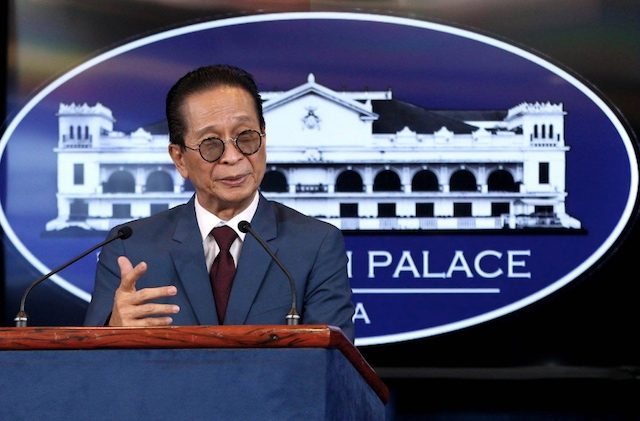 Facebook Twitter Copy URL
Copied
'The Philippine position is that every country has a right to use the waters in the South China Sea as well as the airspace. And we want peace and quiet in that area. So anything that will provide such kind of atmosphere, we are for it,' says Presidential Spokesperson Salvador Panelo

MANILA, Philippines – The Philippines supports any United States action in the South China Sea (West Philippine Sea) that would maintain stability in the region amid the continued military buildup of China in the area, President Rodrigo Duterte’s spokesman said on Tuesday, June 4.

Presidential Spokesperson Salvador Panelo was asked about the recent statement of US Acting Defense Secretary Patrick Shanahan that the US would no longer “tiptoe” around China’s behavior in the South China Sea. (READ: China must stop eroding neighbors’ sovereignty – U.S.)

Asked if the Philippines wants the US to walk its talk, Panelo said in a Palace briefing: “The Philippines would want stability in this part of the world, in that part of the world. The Philippine position is that every country has a right to use the waters in the South China Sea as well as the airspace. And we want peace and quiet in that area. So anything that will provide such kind of atmosphere, we are for it.”

He added, “If the presence of the US will make it so, then that’s good for us – all of the claimants.”

Aside from the Philippines and China, the other claimants to the South China Sea are Brunei, Indonesia, Malaysia, Taiwan, and Vietnam.

Responding to questions at the Palace briefing, Panelo said it would be up to the US to determine the “limits” of its actions in the South China Sea to promote stability in the region.

“That will be left to their judgment, whatever their limits are,” he said in a mix of Filipino and English.

When asked again if the Philippines would not object to US presence in the South China Sea – which China is strongly opposed to – Panelo said, “We desire peace and quiet in that area, no matter upon whose initiative, coming from any country.”

He also said any US action should also not infringe on Philippine sovereignty.

In a regional security forum in Singapore on Saturday, June 1, Shanahan had said: “China can and should have a cooperative relationship with the rest of the region…. But behavior that erodes other nations’ sovereignty and sows distrust of China’s intentions must end.” (READ: Huawei and the Shangri-La Dialogue)

“Until it does, we stand against a myopic, narrow, and parochial vision of the future, and we stand for the free and open order that has benefited us all, including China,” added Shanahan, who also said that the US was investing heavily in the Indo-Pacific region to maintain its military superiority and capability to defend its Asian allies.

A day before the Singapore forum, on Friday, May 31, Duterte questioned China’s claim to the entire South China Sea during a speech at Nikkei’s International Conference on the Future of Asia in Tokyo, where he was on a working visit. He urged China to complete the South China Sea Code of Conduct to reduce the risks of conflict in the disputed area.

But Duterte had also said in the Tokyo forum that the US should keep its distance when it came to issues with China and the South China Sea, as clashes between the two would make the situation worse. – with a report from Agence France-Presse/Rappler.com