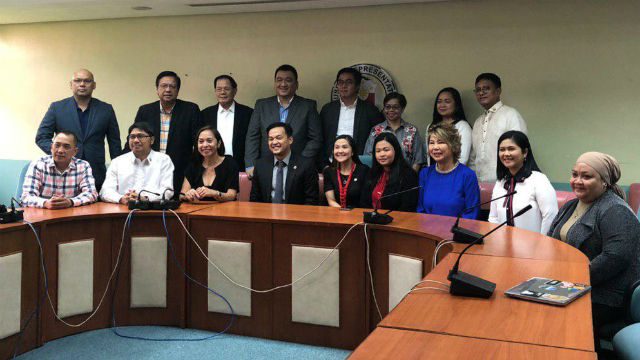 Facebook Twitter Copy URL
Copied
If President Rodrigo Duterte doesn't endorse anybody in the speakership race, then the party-list lawmakers are consulting her daughter Davao City Mayor Sara Duterte for her choice

MANILA, Philippines – The 54 lawmakers in the party-list coalition will vote for whoever President Rodrigo Duterte endorses for speaker of the House of Representatives.

According to 1-Pacman Representative Mikee Romero, who will be president of the Party-list Coalition Foundation Inc (PCFI) in the 18th Congress, all 54 legislators will be voting as a bloc.

“The reality is, this is the House of Representatives. And of course, ‘pagka ang Presidente may pinili, napakahirap naman to go against it, ‘di ba? ‘Yan ang reality ngayon. This is a numbers game,” said Romero in a press conference on Tuesday, June 4.

(The reality is, this is the House of Representatives. And, of course, when the President chooses someone, it would be hard to go against it, right? That’s the reality we have now. This is a numbers game.)

Traditionally, the Speaker of the House is an ally of the President to ensure the latter’s pet bills are passed into law.

Duterte, however, previously said he is not going to dabble in the speakership race in the 18th Congress. A number of his allies have expressed their intention to become Speaker.

So what happens if President Duterte sticks to his word of not endorsing anybody? Then the party-list bloc will turn to feisty presidential daughter and Davao City Mayor Sara Duterte Carpio to make the choice.

“Again, if the principal, who is our President, will not give a decision, then probably the closest to the principal might. So we need to consult with her,” said Romero.

Deputy Speaker and AAMBIS-OWA Representative Sharon Garin said Sara Duterte will be “vital” in their bloc’s final choice for Speaker.

Months later, Sara Duterte said she would not be interfering in the speakership battle in the 18th Congress, though she said she has a personal choice.

With 54 members, PCFI will be the second biggest bloc in the House in the 18th Congress. Duterte’s Partido Demokratiko Pilipino-Lakas ng Bayan will continue to dominate the House with more than 80 members.

The party-list lawmakers said they would back the aspirant who will grant them a 20% allocation out of the total committee chairmanships in the 18th Congress.

“We are looking for what is just proportional to our membership. If the party list, by law, is 20% of the composition of the House, we are looking at 20% of the chairmanships as well. What is properly due to  the coalition, that is what we are asking for – equal treatment among all parties, including the party-list coalition,” said Garin.

She explained the leadership positions they currently have in the 17th Congress are not equal to 20% of the total composition of the House. These posts include Garin’s deputy speakership, two seats in the Commission on Appointments, two seats in the House of Representatives Electoral Tribunal, and 11 committee chairmanships.

“The stand of the party-list coalition is if they don’t give the 20% minimum, then you are not advocating the 30 million constituencies of all the party-lists. Most probably…we will not be an advocate for whoever that Speaker is. It’s 20% or nothing,” said Romero.

The bloc was also supposed to meet with Alvarez, who wants another shot at the post he lost. But the party-list lawmakers said Alvarez had not yet returned from the province as of Tuesday afternoon.

So far, all leading contenders in the speakership battle have agreed to the 20% chairmanships request of the party-list bloc. – Rappler.com