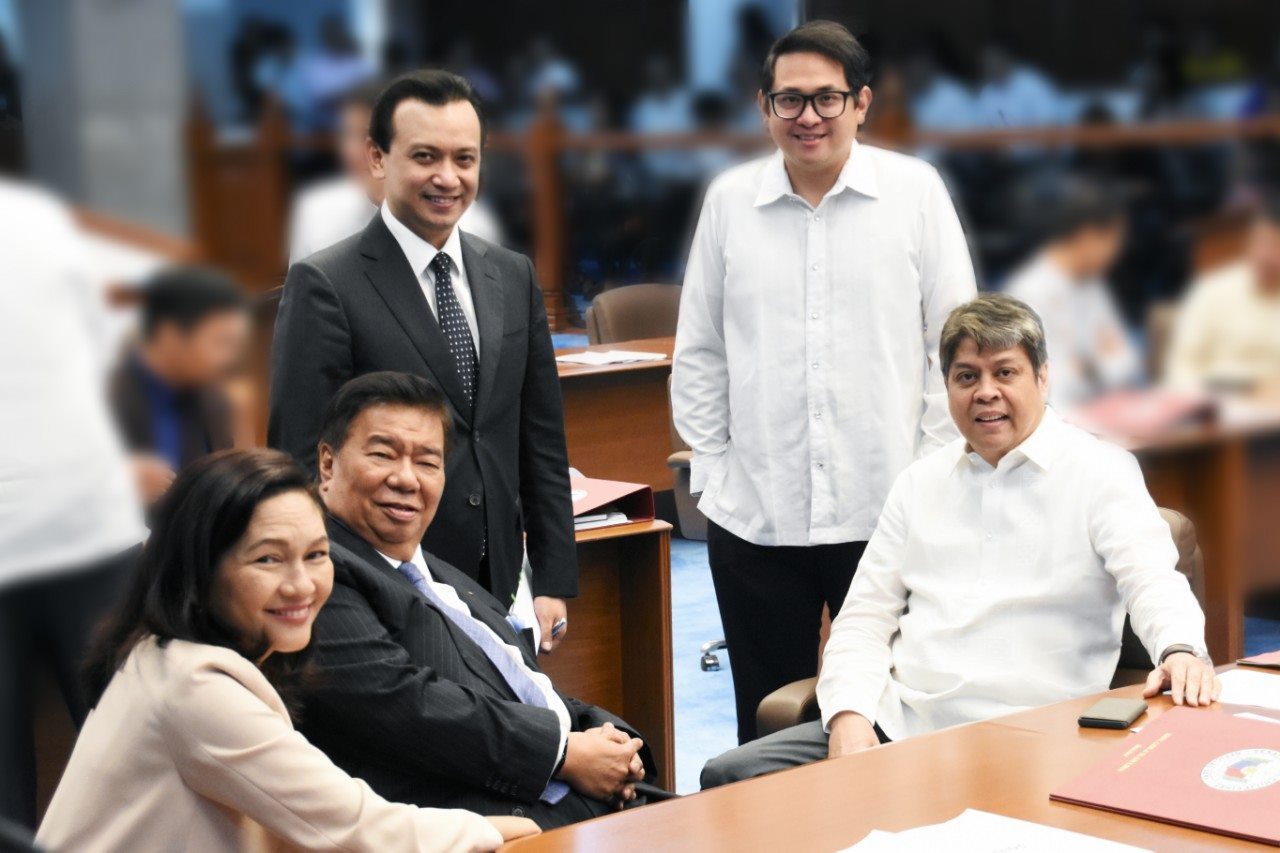 Facebook Twitter Copy URL
Copied
'We are proud of what we have done. We can look people in the eye, critics or otherwise, because we know that we did not fail them,' says Senate Minority Leader Franklin Drilon

MANILA, Philippines – As the 17th Congress ended, Senate Minority Leader Franklin Drilon touted the accomplishments of the 6-member opposition bloc from 2016 to 2019.

Aside from Drilon, the other members of the minority bloc in the Senate are Paolo Benigno Aquino IV, Leila de Lima, Risa Hontiveros, Francis Pangilinan, and Antonio Trillanes IV.

Despite the attacks against them, as well as De Lima’s detention, Drilon said the minority senators still managed to become productive in the 17th Congress, spearheading the passage of landmark legislation.

“The 17th Congress has not been easy for the opposition. It is hard to be in the opposing side these days,” Drilon said.

“We saw our colleague Senator De Lima detained. All of us in the minority were subjected to criticisms and attacks. Despite all these, we soldiered on and remained focused on one goal: to get things done for the people,” he added.

Drilon said the minority bloc’s achievements prove that the opposition “has not been a hindrance in the passage of meaningful legislation and policy formulation.”

“We are proud of what we have done. We can look people in the eye, critics or otherwise, because we know that we did not fail them,” he said.

The bloc will be losing two members in the 18th Congress. Trillanes finished his two consecutive terms, while Aquino failed in his reelection bid.

He was also the author of the New Central Bank Act, and is among the authors of the Department of Housing law.

In Senate deliberations and in the bicameral conference committee, Drilon also ensured that the Bangsamoro Organic Law would be constitutionally compliant.

It was also Drilon’s proposal that helped solve the budget deadlock between the House of Representatives and the Senate.

Aquino, who had served as deputy minority leader, was the chairperson of the education committee.

He sponsored the free college tuition law and pushed for the Balik Scientist Act and the Free Wi-Fi in Public Spaces Act.

A neophyte senator, Hontiveros had served as chairperson of the health committee and then its vice chair.

She pushed for the Expanded Maternity Leave Act and the Mental Health Act, as well as the Universal Health Care Act, which was authored by Senate President Pro-Tempore Ralph Recto.

Hontiveros also shepherded the passage of the Safe Streets and Public Spaces Act which penalizes catcalling and sexual harassment in the streets, schools, and workplaces.

She also pushed for the landmark anti-hospital deposit law and the Philippine HIV and AIDS policy law.

Pangilinan, former chair of the Senate committee on food and agriculture, was the principal author and sponsor of the recently enacted Sagip Saka Act.

The law increases farmers’ income by empowering them and connecting them to the market.

Pangilinan is also the principal author of the Free Internet Access in Public Places Act.

He also pushed for and defended the coconut levy trust fund bill, which the Senate later divided into two bills. These measures would have allowed the return of the multibillion-peso coconut levy funds to farmers, but President Rodrigo Duterte vetoed the bills. (READ: ‘Na-Duterte kami:’ Why farmers feel betrayed by coco levy vetoes)

It was also Pangilinan, as chair of the committee on constitutional amendments and revision of codes, who led the hearings on the proposed charter change.

He was also a co-author of the enacted Philippine Identification System Act.

Trillanes also pushed for the Magna Carta of the Poor, which protects and upholds the rights of the poor to adequate food, decent work, education, housing, and health.

It was Trillanes who sponsored the measure on behalf of De Lima, chairperson of the committee on social justice, welfare, and rural development.

Despite being in jail since February 2017, De Lima was able to pass measures such as the institutionalization of the Pantawid Pamilyang Pilipino Program and the Magna Carta of the Poor.

In his closing speech, Senate President Vicente Sotto III commended De Lima for her “professionalism,” saying she has been working despite being in detention.

De Lima has been detained at the Philippine National Police Custodial Center in Camp Crame since February 2017, over alleged drug charges. She denied the accusations and said these were fabricated by Duterte to get back at her for investigating the extrajudicial killings of the Davao Death Squad when he was still Davao City mayor. – Rappler.com