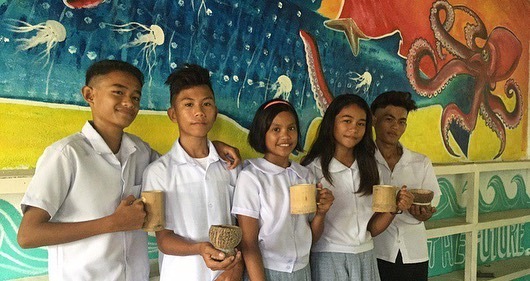 NEGROS OCCIDENTAL, Philippines – A public high school in Cauayan town here opened a zero-waste canteen to promote a plastic-free culture among its students and teachers.

Bulata National High School adopted the initiative of the Philippines Reef and Rainforest Conservation Foundation Inc (PRRCFI), which launched a movement to help reduce the use of plastics.

The school’s plastic-free canteen opened on Monday, June 3, the first day of classes. It uses alternative packaging for the meals and snacks it offers to its more than 400 students and faculty members, said Dave Albao, executive director of PRRCFI.

He said the wala usik canteen uses biodegradable, indigenous, and reusable materials, such as mugs made from bamboo, bowls from coconut shells, and plates from banana leaves. “Wala usik” is a local term for “zero waste” or “nothing is wasted.”

“The school canteen also aims to promote healthy eating from fresh and local produce, and will avoid and discourage processed food packaged in single-use plastic,” he added.

He said Yap is now leading the transition of their canteen to a plastic-free facility. He added that single-use plastic products are often mismanaged in schools nationwide and present problems to the environment and public health.

In the last two months, a total of 8 zero-waste stores have opened in Negros Island. “All these efforts are to curb plastic waste, which harm our food source and life support when they reach the ocean,” Albao said.

Meanwhile, the zero-waste canteen in BNHS also features walls painted with colorful marine life with the theme “More Fish, Not Plastic” by volunteers from the Association of Negros Artists. It pays homage to the rich biodiversity of Cauayan waters and the Danjugan Island Marine Reserve and Sanctuaries, also part of Barangay Bulata.

Yap is also seeking additional support from stakeholders to make the school canteen fully operational, such as more chairs, tables, and equipment. It will be managed by the school’s Teachers’ League Association, and will also be used for school-based feeding programs. – Rappler.com