Aduana ruins in Intramuros one step closer to restoration 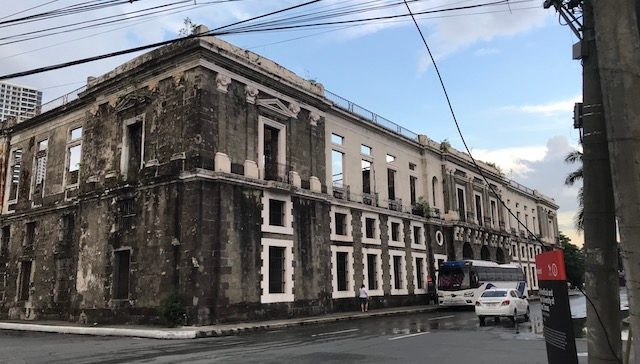 Facebook Twitter Copy URL
Copied
Public Works Secretary Mark Villar commits to ensure funding and support for the reconstruction of the Aduana, envisioned to be the new home of the National Archives of the Philippines

MANILA, Philippines – The Aduana, now known to most as overgrown ruins inside Intramuros, is one step closer to a revival.

Public Works Secretary Mark Villar has given his commitment to ensure funding for the reconstruction of the building, with a budget appropriation for it eyed in the 2020 General Appropriations Act or national budget.

“The personal commitment made by Secretary Villar is he’s going to lobby for the funding support of the project and that DPWH will support the project, not just for assistance in terms of funding but also for the technical development of the plans and programs,” Intramuros Administration chief Guiller Asido said in an interview with Rappler on Monday, June 3.

Villar made the commitment during his meeting with Intramuros Administration officials on Monday morning.

The Aduana, also called the Intendencia, will be the new home of the National Archives of the Philippines, a plan which began in 1979, during the Marcos regime.

The NAP safeguards some 60 million documents, including rare records from the Spanish and American colonial period, and Japanese occupation.

Despite its crucial role in preserving heritage and collective memory, it’s had to put up shop in various locations. It’s last location, Juan Luna Building in Binondo, was hit by a fire in 2018 but no historical documents were damaged.

The NAP was housed in the National Library. Today, it operates from Paco, Manila.

After Villar’s commitment, the Department of Public Works and Highways (DWPH) will need to validate the cost of reconstructing the Aduana, given that cost estimates of previous plans have to be adjusted to current prices of materials.

But it will be the NAP that will implement the project.

According to Asido, Villar made it clear that “he does not agree with any demolition” of the Aduana. This means reconstruction would make use of the existing structure, rather than leveling the ruins and starting from scratch.

Because reviving the Aduana has long been planned, the schematic drawings for the reconstructed building are ready and just need to be implemented, added Asido.

The plans include a museum and reading area, to allow the public to appreciate the heritage building while enjoying access to documents in NAP’s safekeeping.

Most visitors to Intramuros will remember Aduana as a curious ruins beside the Walled City’s Bank of the Philippine Islands branch.

A crumbling grey shell with trees and bushes growing within, it has often lured heritage buffs and photographers with its “haunted” look.

The fascination is not without basis given the Aduana’s colorful history. It began during the Spanish colonial period as a customs house. Galleon ships from Acapulco, Mexico, would unload their goods first into the Aduana, strategically located near the Pasig River.

It was damaged by an earthquake in 1863 then served as Central Administration, Office of Archives, and home of the Philippine Senate after its reconstruction.

In the 1930s, it was back to being a customs house. World War II did not spare the Aduana. It was heavily damaged but got a new lease on life after the war, housing the National Treasury, the first Bangko Sentral ng Pilipinas, and then the Commission on Elections.

It was a 1979 fire that led to the Aduana’s present condition. In 1997, the Ramos administration attempted to reconstruct it but the effort did not bear fruit.

Will the Aduana finally rise from the ashes under the Duterte administration? – Rappler.com