Jun 11, 2019 12:55 PM PHT
Rappler.com
Facebook Twitter Copy URL
Copied
'Our mother's ordeal in the hands of CIDG was a clear example of the vicious pattern of state forces of attacks against journalists, dissenters, and human rights defenders,' says the Valle family 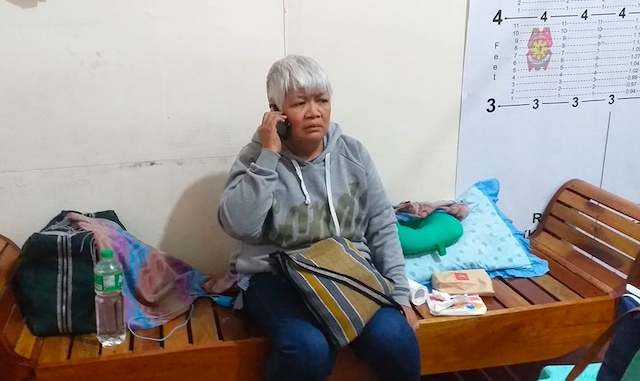 MANILA, Philippines – The family of Margarita “Gingging” Valle said on Tuesday, June 11, that the Davao-based journalist was a “clear target” of state forces out to muzzle critics of human rights violations in the country, especially in Mindanao.

The Valle family issued the statement a day after the Philippine National Police (PNP) Criminal Investigation and Detection Group (CIDG) apologized to the Davao Today columnist for arresting her over the weekend, calling it a case of “mistaken identity.”

“Our mother’s ordeal in the hands of CIDG was a clear example of the vicious pattern of state forces of attacks against journalists, dissenters, and human rights defenders; the wanton disregard for the rule of law justified by the current martial law in Mindanao,” the family said.

They added: “Gingging’s case is not one of mistaken identity at all. She was a clear state target. Mistaken identity is but a ludicrous propaganda of the PNP in the advent of the public outrage and pressure to surface and release our Nanay Gingging.”

Valle was released after a 12 hour-detention at Camp Abelon in Pagadian City. The family did not mention the apology of the CIDG in the statement, and reiterated that Valle’s human rights had been violated. (READ: CHR: Mistaken arrest of Davao columnist ‘puts into question’ PNP guidelines)

“In violation of her fundamental rights, Gingging Valle was arrested and remained incommunicado for about 8 hours.  She was not allowed to be assisted by counsel, to be appraised of the charges against her, and to examine the purported warrant/s that was made the basis of her arrest,” the family said.

The Valles added that police had no “due regard and consideration” to the health condition of the 61-year-old, who would undergo a medical checkup and debriefing.

The family thanked all those who supported them throughout the ordeal as they demanded justice for Valle.

“No stones should be left unturned and the police officers involved should be held accountable for this heinous incident.  We are carefully studying all possible remedies against those responsible for this incident.  Let us all remain vigilant. We should remain firm and steadfast in our struggle for our fundamental rights and freedoms,” the family said.

“Our family, along with countless others who decry what clearly was a human rights violation, demand justice for Nanay Gingging Valle. Because state terror wins only when fear rules over people. We will not be silenced,” they added.

The Valles said the journalist “is part of the growing number of human rights workers and defenders, journalists, Lumad, peasants, and workers who have been targeted for their stand against the countless state-sponsored human rights violations, especially in Mindanao.”

The family said Valle’s arrest based on an alleged report received by the CIDG “is an old familiar tune.” They cited the experience of 63-year-old Amelia Pond, a worker of the Rural Missionaries of the Philippines who was arrested by CIDG operatives in Cebu City “by virtue of a warrant of arrest against one Adelfa Toledo.” (READ: Rebel or missionary? ‘Senior NPA member arrested in Cebu)

Pond, a Lumad school teacher, was released after over a year in detention after the complainants themselves recanted their allegation that she was Adelfa Toledo. – Rappler.com