‘Imperative’ for next Speaker to come from PDP-Laban, says Pimentel 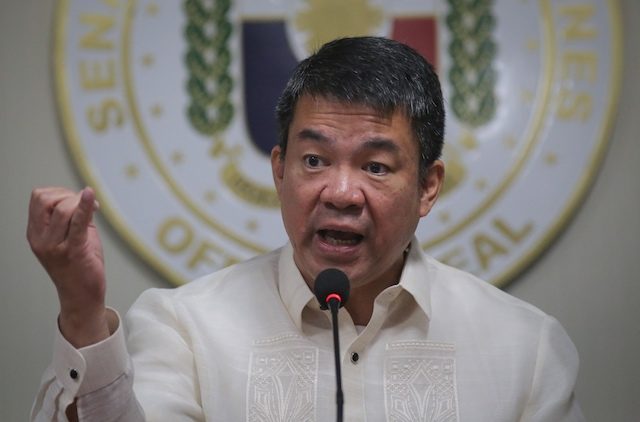 Facebook Twitter Copy URL
Copied
'The party of President Duterte is the biggest bloc in Congress with more than 94 representatives on top the party-list congressmen allied with us,' says Senator Aquilino Pimentel III, PDP-Laban president

MANILA, Philippines – As the biggest bloc in Congress, the ruling Partido Demokratiko Pilipino-Lakas ng Bayan (PDP-Laban) must regain the speakership in the 18th Congress, its party president said on Wednesday, June 12.

PDP-Laban president Aquilino Pimentel III, who was also present, said it is crucial for the party to regain the speakership in the 18th Congress.

“The PDP-Laban, the party of President Duterte, is the biggest bloc in Congress with more than 94 representatives on top the party-list congressmen allied with us and therefore it is imperative that the Speaker should be come from PDP-Laban,” Pimentel said in a statement.

Alvarez told Rappler in a text message that PDP-Laban has yet to decide on its candidate for the speakership race.

Another source said the 3 speakership bets will meet with Duterte, PDP-Laban chair, later this week to finalize PDP-Laban’s choice. Pimentel said he has tasked Pacquiao, the campaign manager of PDP-Laban’s senatorial slate in the May elections, to announce the party’s final candidate for Speaker.

“As party president, I am delegating the task and responsibility of announcing the party’s nominee for Speaker of the House to our campaign manager of the recently concluded successful national and  local elections, Senator Manny Pacquiao,” said Pimentel.

Of the 3 PDP-Laban speakership bets, Velasco is believed to be among the top contenders as presidential daughter and Davao City Mayor Sara Duterte expressed her supportfor his bid during the election campaing. Velasco and his wife Wen are also close friends of the President.

Alvarez was ousted as Speaker last year, with the help of Sara Duterte. Still, the PDP-Laban Secretary-General remains a loyal ally and friend of the President, whose controversial pet bills like the death penalty was passed by the House under Alvarez’s leadership.

Other leading names in the speakership battle are incoming Leyte 1st District Representative Martin Romualdez, who supposedly already got the support of more than 153 lawmakers who signed a manifesto, and incoming Taguig City-Pateros Representative Alan Peter Cayetano, Duterte’s running mate in the 2016 polls. – With reports from Camille Elemia/Rappler.com