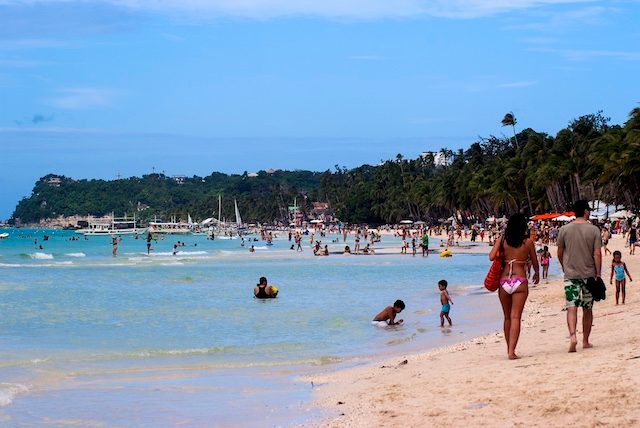 Facebook Twitter Copy URL
Copied
The number of Chinese tourists to the famed island nearly doubled in the first 5 months of 2019, while less Filipinos visited Boracay during the period, according to data from the Malay tourism office

AKLAN, Philippines – China and South Korea continued to be the largest sources of visitors to Boracay Island for the first 5 months of 2019.

Data from the Malay Municipal Tourism Office showed that about 79% of the total number of tourists in Boracay from January to May came from China and Korea.

New airline routes and warmer Philippine ties with China helped boost Chinese tourist arrivals to Boracay, with 218,161 tourists from mainland China recorded during the period nearly twice as much or 46% more than the 148,964 who visited the island in the same period last year.

Foreign tourists outnumbered local tourists, with  480,856 foreign tourist arrivals recorded during the period, up by 12% from last year’s 430,785.

Other key sources of tourists to Boracay are the United States with 12,424 tourist arrivals from that country, Taiwan with 10,953, and Russia with 6,614.

North Americans or tourists from the US, Canada, and Mexico registered a total of 16,462 arrivals while Northern Europeans from Finland, Norway, Sweden, Denmark, the United Kingdom, and Ireland totaled 12,944.

Data also showed that a total of with 5,849. Southeast Asians from Singapore, Brunei, Myanmar, Indonesia, Laos, Cambodia, Malaysia, Vietnam, and Thailand visited the island from January to May.

As of June 4, the inter-agency task force in Boracay accredited 358 accommodation establishments with 12,952 rooms.  – Rappler.com