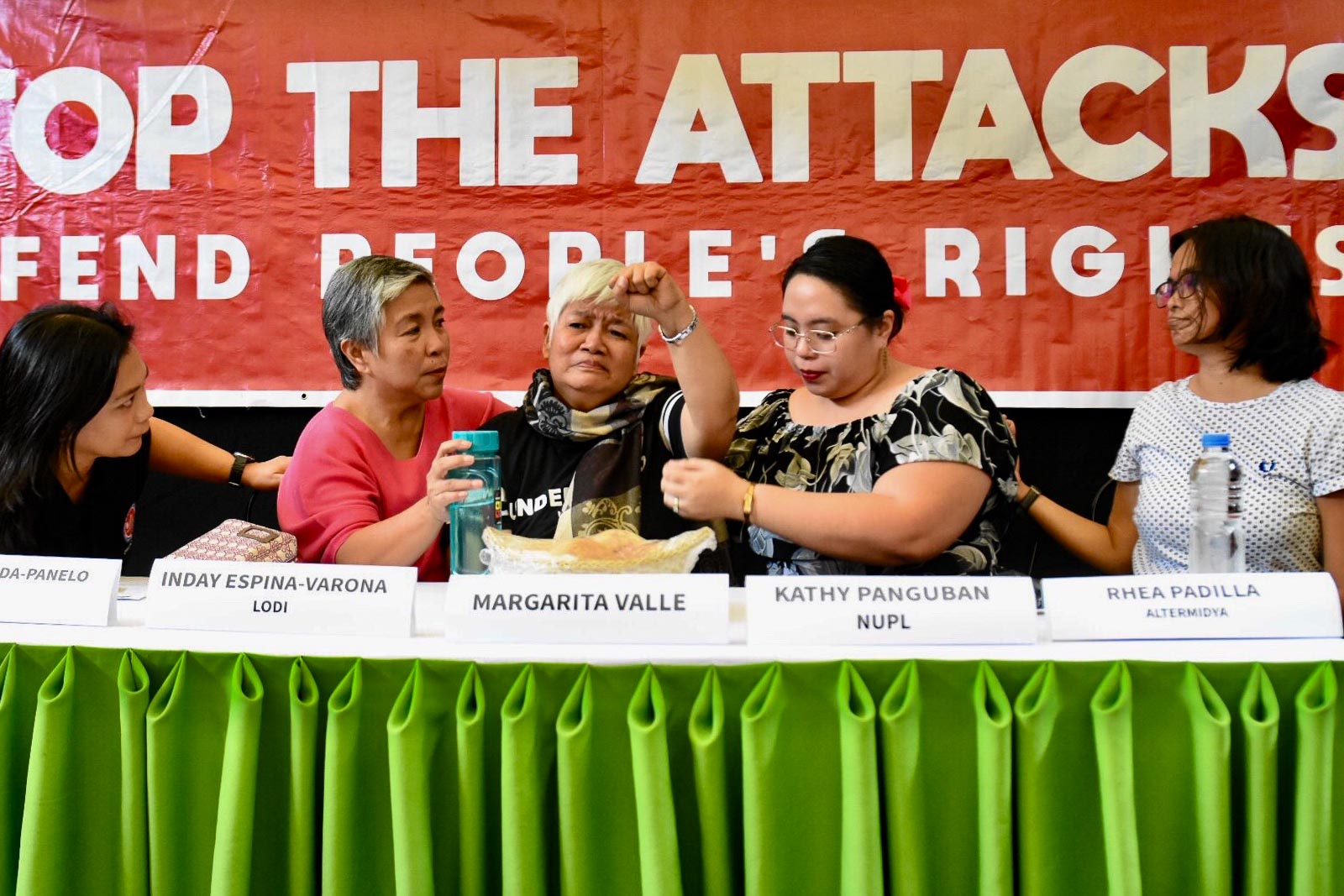 MANILA, Philippines – Davao-based journalist Margarita “Gingging” Valle on Wednesday, June 12, appeared before the media to recount the “torture” that she experienced during her mistaken arrest.

On June 9, the 61-year-old journalist was nabbed by cops and soldiers at the Laguindingan Airport in Misamis Oriental using a warrant of arrest issued against Elsa Renton, alias Tina Maglaya and Fidelina Margarita Valle, for charges of “multiple murder with quadruple frustrated murder,” destruction of government property, and arson.

The police later on claimed this to be a case of mistaken identity after a witness confirmed that Valle only has a “major resemblance” to the actual suspect.

Valle’s legal counsel, Kathy Panguban of the National Union of Peoples’ Lawyers, said that they are considering filing criminal and administrative charges against the members of the Philippine National Police (PNP) and Crime Investigation and Detection Group (CIDG) who arrested and violated her human rights.

“She was arbitrarily detained and deprived of her liberty for 12 hours without any probable cause,” Panguban added. 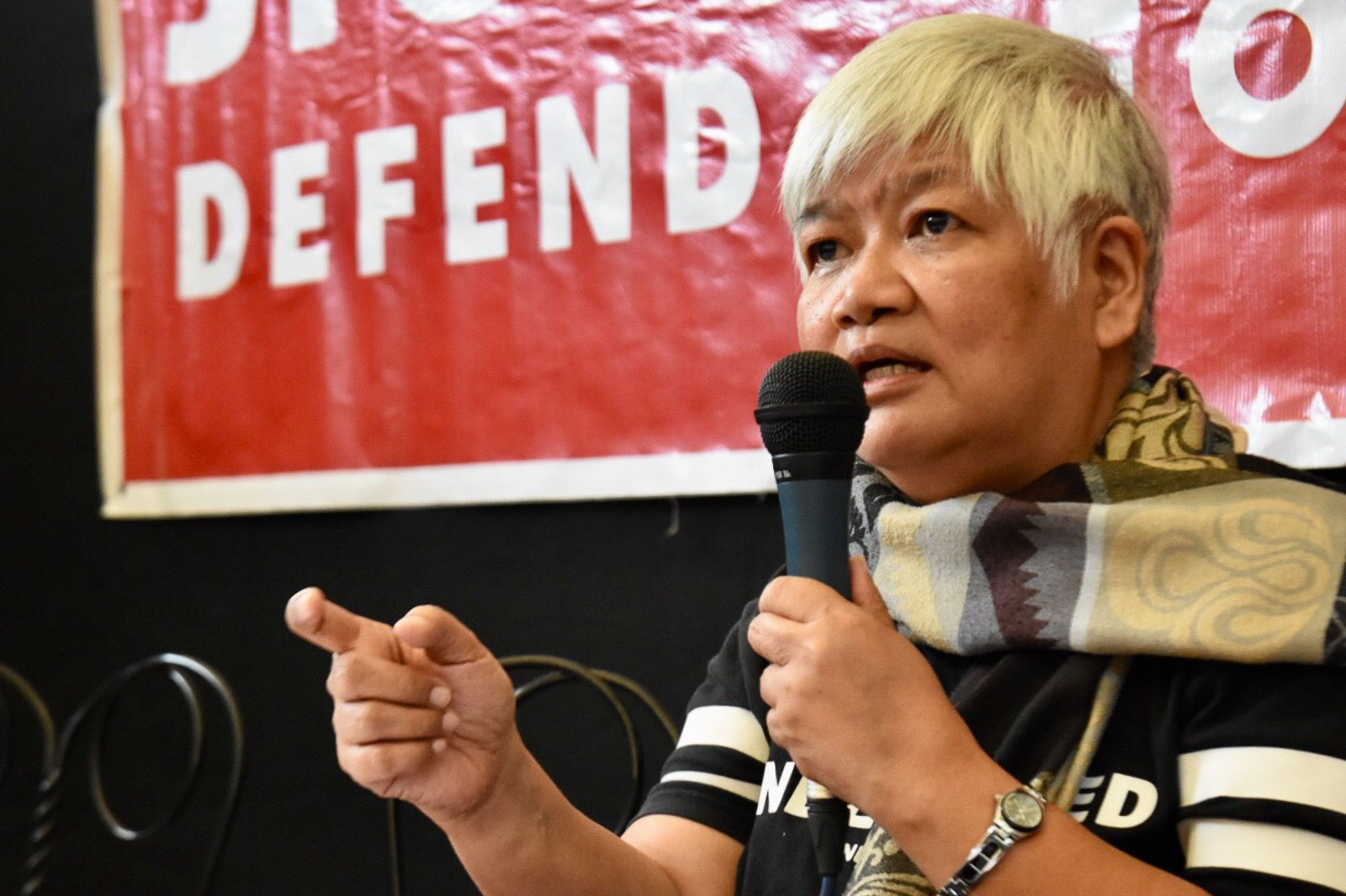 Valle recalled that she didn’t get to hold the supposed warrant and was only shown the name of the suspect that’s different from hers.

(I asserted my right from the very start. I showed them my identification cards, everything. I am not that criminal they’re looking for, whoever that is. And I also thought that what’s there[the name in the arrest warrant] isn’t even mine. It occurred to me that they really wanted to get me. But why won’t they show the arrest warrant?)

Valle also recalled that during her arrest, she wasn’t given the opportunity to consult a lawyer and was held incommunicado for 8 hours.  She also claimed that the arresting officers did not inform her exactly where they were headed.

“Para sa akin torture yun eh. Torture kasi hindi ko alam kung ano ang mangyayari sa akin, ano ang sunod na mangyayari (For me, it was a torture because I didn’t know what was going to happen to me, what will be happen to me next),” Valle said.

From the airport, Valle was taken to the Iligan City police station and then at Camp Abelon in Pagadian City, where she was released after a 12 hour-detention.

“Bakit ganoong treatment ang ginawa sa akin..ginawa nila akong kriminal. Naging criminal ako doon eh, nag mugshot ako, fingerprint ako. Ano bang klase yan, eh makikita naman ako sa media…hindi ako kriminal (Why was I treated that way? They made me a criminal. I became a criminal there, I had a mugshot, fingerprint. What kind of process is that? They can see me in the media. I am not a criminal),” Valle emphasized.

She also said that the police offered her food, but she couldn’t even swallow it for fear of her life. Following her arrest, she got hypertensive and experienced difficulty breathing.

Several media organizations said the mistaken arrest was an attempt to silence journalists like Valle who has been in the media industry for more than 30 years.

Dabet Panelo of National Union of Journalists of the Philippines (NUJP) also emphasized that what happened to Valle was not an arrest but an “abduction” and would call for a legal battle.

“Hindi madali ang ganitong pinagdadaanan ang ganitong nangyayari sa media. Sana hindi natin bitawan ang kaso. (What the media is going through right now is not easy. I hope that we will not just give up on the case),“ Panelo said pointing out that only few are convicted despite the various media killings happening in the country.

Inday Espina-Varona of Let’s Organize for Democracy and Integrity (LODI) pointed out that the story of Valle is what exactly happens to people when due process is violated and legal processes are short cut. She also said that Valle’s mistaken arrest is not an isolated case.

“The most dangerous thing for us to do right now is to think that only certain people deserve to have their rights protected…Today, it may be Ms. Valle, but tomorrow it could be you,” Varona added.

The groups expressed their support for Valle as she is set to file charges against the police responsible for her mistaken arrest. – Rappler.com