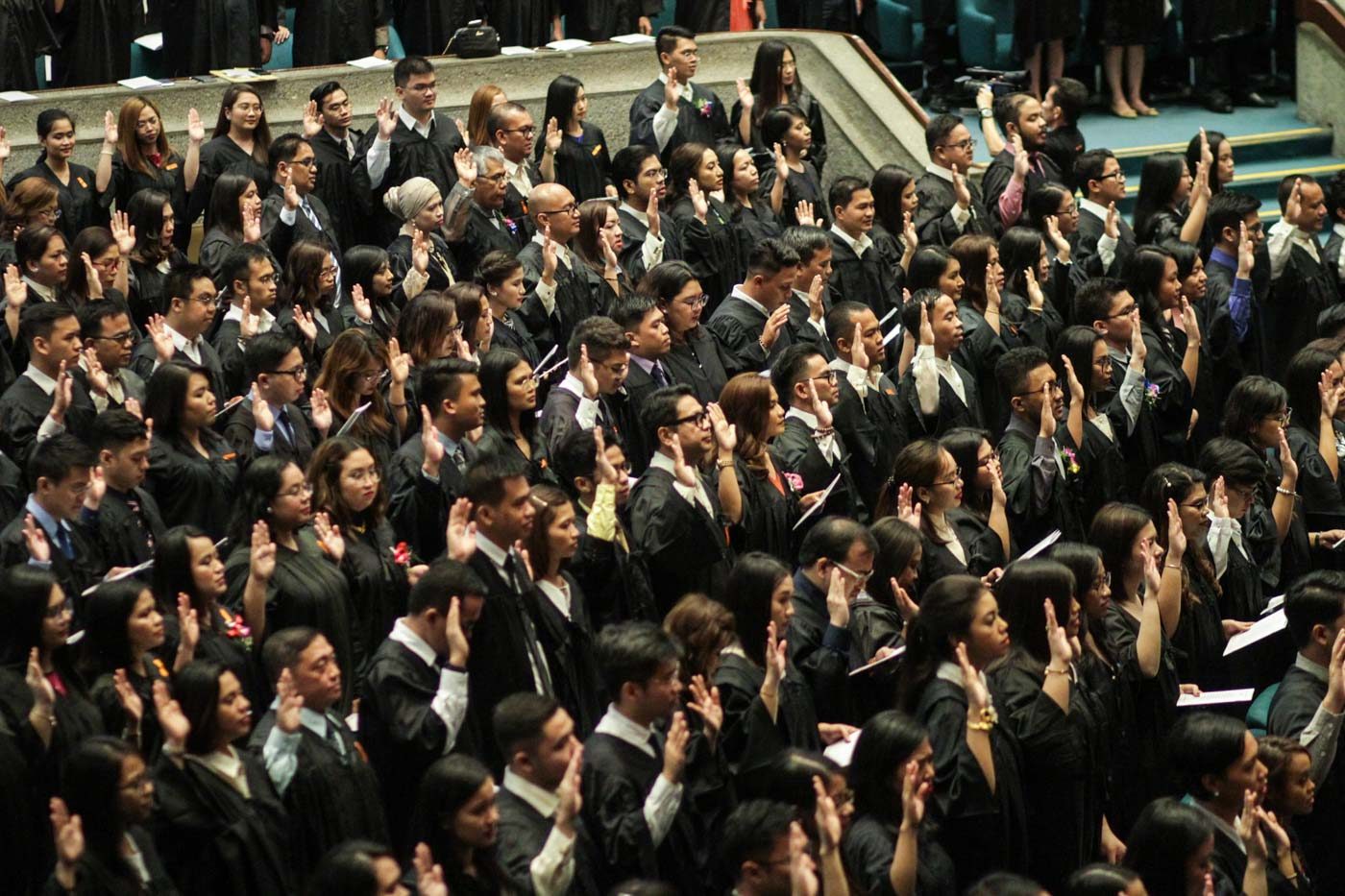 Facebook Twitter Copy URL
Copied
‘When making a choice, go with your heart even if it terrifies you,’ says Supreme Court Associate Justice Estela Perlas-Bernabe

MANILA, Philippines – “Never compromise your integrity,” is the main message of Supreme Court Associate Justice Estela Perlas-Bernabe to the 1,800 new lawyers who took the oath on Thursday, June 13, after passing the 2018 bar examinations.

“At the end of it all, always remember that in whatever opportunity you choose, your integrity is non-negotiable,” said Bernabe, who delivered this year’s address to new lawyers.

The 1,800 new lawyers make up the 22.07% who passed the 2018 bar examinations, chaired by Associate Justice Mariano del Castillo who will retire on July 29.

The oath-taking ceremonies this year went smoothly – a stark difference to the palpable tension in 2018 when the Supreme Court was reeling from the Maria Lourdes Sereno quo warranto controversy.

During last year’s rites, new lawyers wore purple ribbons in protest of the unprecedentend ouster of Sereno, risking contempt. Then-Associate Justice Lucas Bersamin had seriously warned against “disrespecting the courts and their rulings.”

“You will see it many times in your career that those who rise too fast often fall just as quickly,” De Castro had said.

In comparison, the ceremonies on Thursday lasted only more than an hour, highlighted by Bernabe’s speech. She shared how she left a lucrative private practice to heed the call of public service which, she said, gave her “a sense of fulfillment that is incomparable to anything.”

“My young lawyers, you will have your own lives to live, and your own stories to tell. As authors of your individual careers, never allow anybody else to hold the pen,” Bernabe said.

She added: “Banish the illusion of perfection, and do not be afraid to take calculated risks. I have often heard it said: When making a choice, go with your heart even if it terrifies you. Hardly will there be a perfect first choice; and rarely will everyone have a perfect beginning. And so, do not be anxious and just treasure every experience.”

She would again be automatically nominated for chief justice.

Bernabe, an unpredictable justice in the High Court, is lauded for the nuances in her decisions which, to some, make her an objective jurist.

For critics of the Duterte administration, however, she would not be an easy favorite.

Bernabe concurred in the decision that acquitted Gloria Macapagal Arroyo of plunder, and in the landmark decision that declared martial law in Mindanao constitutional.

In her speech on Thursday, Bernabe also summed up what she believed to be one’s measure of success in the legal profession.

“Your legacy in this profession will not be measured by how much wealth you have gained or any status you have achieved, but rather, by the number of lives you have touched in fighting for the cause of the oppressed in a world filled with injustice,” she told the new lawyers. – Rappler.com