Jun 14, 2019 8:37 PM PHT
Paterno Esmaquel II
Facebook Twitter Copy URL
Copied
'Take a calibrated response and be as civil as they have to be. I think that's the right approach,' former president Gloria Macapagal Arroyo says, referring to the administration's handling of the incident 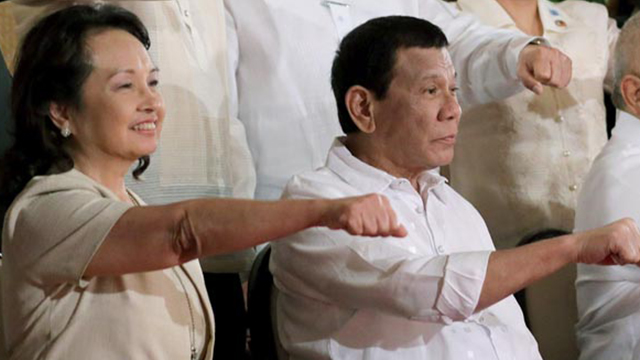 In an interview with ANC, Arroyo said Duterte and Foreign Secretary Teodoro Locsin Jr have taken the “right approach.”

Arroyo – one of the Philippines’ most unpopular presidents, who is now speaker of the House of Representatives – said she has “full confidence” in how Duterte and Locsin view the issue.

“Take a calibrated response and be as civil as they have to be. I think that’s the right approach,” Arroyo said in the interview quoted by ABS-CBN News on Friday, June 14.

During her presidency from 2001 to 2010, Arroyo cozied up to China and signed a controversial joint exploration agreement in the South China Sea. A case challenging the constitutionality of this agreement is pending before the Supreme Court. (READ: Why China chose Arroyo over Aquino)

Duterte, who has also adopted a China-friendly policy, has stayed silent on the June 9 boat sinking incident.

Locsin, while claiming he has filed a diplomatic protest against China, has not lashed out against China over the sinking of a Filipino boat. He has instead vented his anger on others, at one point saying “fuck the international community” when asked to get support from other countries. – Rappler.com