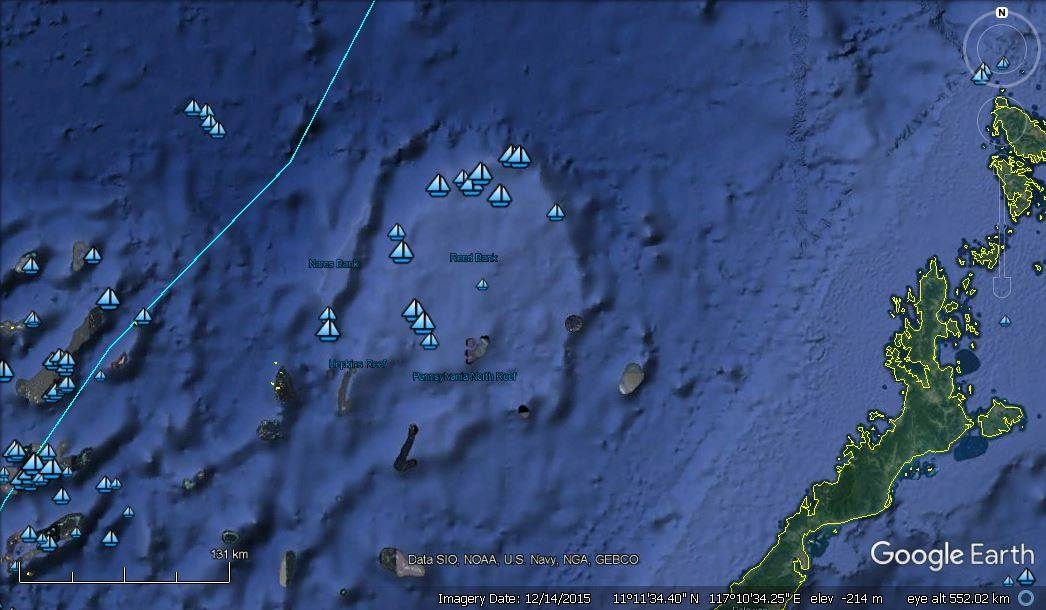 MANILA, Philippines (UPDATED) – Satellite data showed that Chinese ship Yuemaobinyu 42212 could not have been “besieged by 7 or 8 Filipino fishing boats” in Recto Bank (Reed Bank) as China claimed, according to maritime law expert Jay Batongbacal.

Batongbacal interpreted this based on Visible Infrared Imaging Radiometer Suit (VIIRS) satellite data for the night of June 9, when a Chinese vessel sank a Philippine boat in the West Philippine Sea (South China Sea). He posted on Facebook this Google Earth image and captioned it, “The Scene of the Crime.”

In this Google Earth image, each boat-shaped icon represents a fishing vessel in Recto Bank. Of these, the two icons closest to each other have been estimated to be 3 to 5 nautical miles (around 7 to 9 kilometers) apart, said Batongbacal, who based this estimate on Google Earth’s distance measuring tool.

Batongbacal said the imagery date – “12/14/2015” – indicates the date of the Google Earth Blue Marble Map or the base map, while the boat-icons represent the vessels in Recto Bank on June 9, 2019.

This means there could have been no swarm of 7 to 8 vessels because the icons are too far away from each other.

Batongbacal wrote: “VIIRS satellite data for the night of 09 June 2019 shows only a few fishing vessels operating in the area of Reed Bank at the time. Each boat-icon is a fishing vessel identified by its bright lights. They are spread over the wide area of Reed Bank; the closest two lights are about 3-5 nautical miles (approximately 7 to 9 km) apart. What 7-8 vessel swarm of night-marauding Filipino fishing boats is China talking about?” China admitted in a statement Friday evening, June 14, that a Chinese vessel was involved, but claimed that the vessel was “besieged by 7 or 8 Filipino fishing boats,” preventing it from rescuing the Filipino fishermen from their sunken vessel. The captain of the Filipino boat F/B Gem-Ver, in an interview with Rappler, promptly denied China’s claim.

The Chinese ship rammed and sank F/B Gem-Ver within the vicinity of Recto Bank, an underwater reef formation that belongs to the Philippines based on an international ruling, but is coveted by China. The sinking of a Philippine boat by a Chinese vessel is a first in the decades-long tension between Manila and Beijing over the West Philippine Sea.

Batongbacal explained to Rappler that the “entire thumbmark-shaped area” in the Google Earth image is Recto Bank.

Batongbacal said: “I don’t know which one is the immediate area of the incident, but the point is that there is no potential swarm anywhere, and fishing boats operate far from each other. Of course, their visibility depends on whether they were lighted sufficiently or were stationary long enough during the exact time the satellite passed over, but this just shows how unbelievable their claim (being besieged) is.”

In a Thought Leaders piece published by Rappler, Batongbacal also noted that Filipino fishing vessels have not been known to “besiege” other vessels in the high seas.

“There is no prior record of any group of Filipino fishing vessels ‘besieging’ (attacking) any other vessel anywhere in the high seas. Ever. Not even the notorious pirates that used to operate in the southern seas operated that way. Only Chinese maritime militia vessels (and Vietnamese maritime militia responding to the Chinese) have been involved is such coordinated swarming operations,” said Batongbacal.

The captain of F/B Gem-Ver, Junel Insigne, also said there were no other Filipino vessels in the area. It was a Vietnamese vessel that rescued them.

“Kami-kami lang ang nandoon. Kami-kami lang. Wala namang ibang bangka doon. Kami lang doon. Kami lang dahil noong gabing ‘yun lumubog nga kami, kami pa ang aatake?” Insigne told Rappler in Occidental Mindoro. (We were the only ones there. We were the only ones. There were no other boats there. It was only us. It was only us because that night, we sank, so how could we also attack?)

Reacting to China’s claim, Locsin said: “Interesting. That’s China’s take and it is a free world; it can say anything it wants. We say what we want because it is a free world for us too; but in our case we speak from the law of the sea. But still everyone’s free.” – Rappler.com