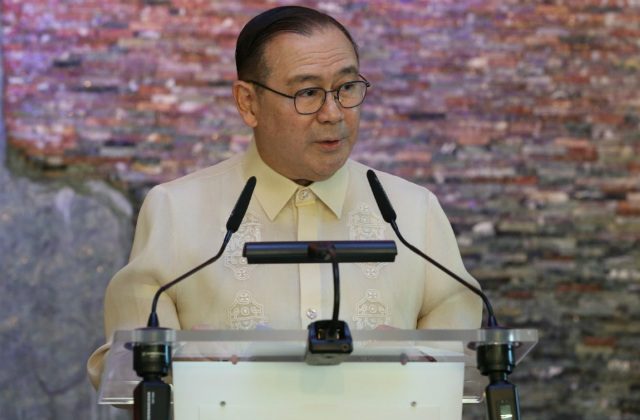 Facebook Twitter Copy URL
Copied
At the International Maritime Organization, the Philippines slams a Chinese vessel that sank a Filipino boat in the West Philippine Sea

MANILA, Philippines – A day after Foreign Secretary Teodoro Locsin Jr cursed at the international community, the Philippines raised before a United Nations agency the sinking of a Filipino boat by a Chinese ship.

The Philippines slammed the Chinese ship in a statement at the 101st session of the Maritime Safety Committee of the International Maritime Organization (IMO) on Friday, June 14. The statement was delivered by Senen Mangalile, the Philippines’ deputy permanent representative to the IMO.

Based in London, the IMO is the UN’s specialized agency on the safety and security of international shipping.

In his statement, Mangalile said the Filipino crew of fishing boat Gem-Ver “were callously abandoned to the elements on the rough seas and would have perished” if a Vietnamese vessel did not rescue them. (READ: INSIDE STORY: How Filipino crew were saved by Vietnamese in West PH Sea)

He said the UN Convention on the Law of the Sea and the IMO Conventions on Safety of Life at Sea and Maritime Search and Rescue “have express provisions on rendering assistance to distressed mariners.”

“It is the obligation of every responsible member state of the UN and the IMO to implement these conventions and related codes concerning maritime safety and security, rather than just paying lip service to them,” Mangalile said.

“It is also our moral obligation to save a human life whenever and wherever we can do so,” he added.

Mangalile made this speech after his boss, Locsin, downplayed the need to seek support from the international community after a Chinese ship sank a Filipino boat.

The incident happened in Recto Bank (Reed Bank) in the West Philippine Sea (South China Sea), which is claimed by China even if it belongs to the Philippines based on a 2016 international ruling.

This is related to the multilateral approach against China pushed by former foreign secretary Albert del Rosario, among others, especially after the sinking of the Philippine boat.

The Chinese ship’s abandonment of Filipino fishermen to the elements is seen as a violation of international treaties. – Rappler.com