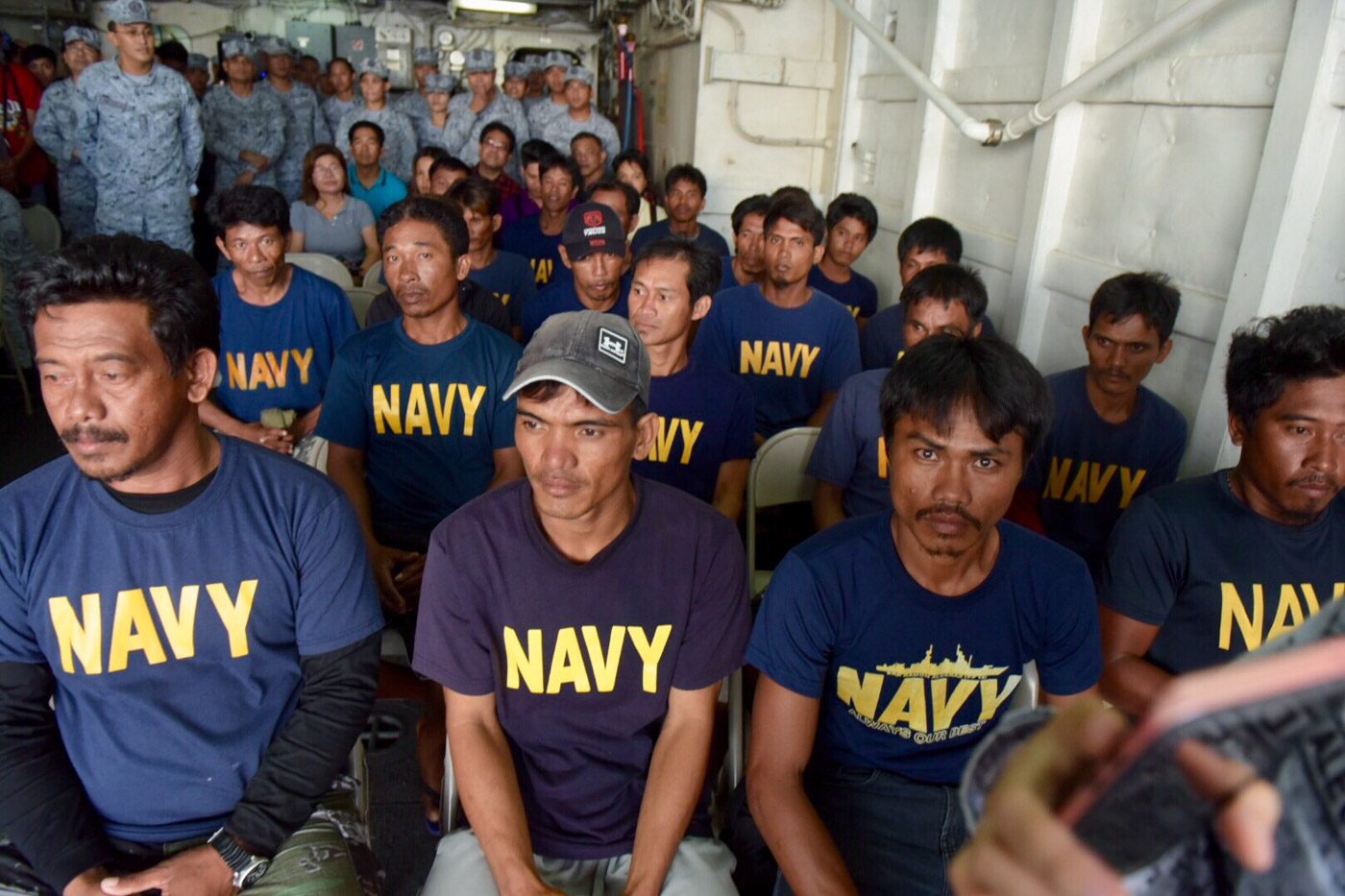 Facebook Twitter Copy URL
Copied
Contrary to the claims of Malacañang, the crewmen of Fishing Boat Gem-Ver were awake before the Chinese boat rammed them. There is more than one witness.

MANILA, Philippines – Contrary to the claims of Malacañang and Department of Agriculture (DA) Secretary Emmanuel “Manny” Piñol, the fishermen of Fishing Boat Gem-Ver were not asleep when a Chinese fishing vessel rammed them in the West Philippine Sea.

Presidential Spokesperson Salvador Panelo and Piñol have been saying in press conferences and interviews that only one crew member was awake during the allision: the boat’s cook, Richard Blaza, who had just finished cooking outside the boat’s cabin.

“Iisa lang pala nakakaalam noong pangyayaring iyon dahil tulog lahat iyong fishermen (Only one knew about what happened because the rest were asleep),” Panelo said in a Malacañang briefing on Tuesday, June 18.

However, Blaza himself said in an interview facilitated by Piñol on Monday, June 17, that he woke up his fellow crewmen before the Chinese boat hit them. He was not the only crewman awake.

Blaza woke up the boat’s captain, Junel Insigne, who then tried to maneuver the boat away from the Chinese vessel’s path. But it was too late.

Blaza’s statement was echoed by at least 4 fishermen Rappler spoke with in Occidental Mindoro. Below are their accounts before they were rammed:

Cirilo Escuterio: “Sumigaw ‘yung kasama namin na, ‘Oy, gumising kayo, may barkong parating at babanggain tayo.’ Sabay takbo sa loob ng higaan ng kapitan, sabay sabi, ‘Kap, start mo makina babanggain tayo ng barko.'” (One of our crewmen shouted, ‘Wake up, there’s an incoming ship that’s about to ram us.’ He then ran to the captain’s sleeping area, then told him, ‘Cap, start the engine, a ship is about to ram us.)

Antonio Torres Jr: “Nagising ako, may sumisigaw, ‘Barko, barko, mababangga tayo ng barko.’ Bigla ako bumangon…tumakbo ako pababa, pagtingin ko pabangga na ‘yung barko sa hulihan namin.” (I woke up with people shouting ‘Ship! Ship! A ship is going to ram us.’ I stood up, ran down, and when I looked, the ship was about to hit our rear.)

JP Gordiones: “Nasa loob ako ng kamarote, nakarinig lang po ako ng sigaw, sabi niya may barko na babangga, tumakbo po ako sa unahan.” (I was inside the cabin, I heard a shout, he said there was an incoming ship. I ran to the front.)

During his interview on Monday, Blaza said he only saw lights inside the cabin of the Chinese vessel. The rest of the crewmen Rappler spoke with, including the captain, added that they were able to identify the ship when it came close to the wreckage and opened its lights to see them. It was Chinese.

They all agreed that after the ship turned on its lights to see them, it pulled back and sped away, leaving them sinking.

Why does this matter? Panelo has cast doubt on the account of the fishermen based on the assumption that all of them were asleep save for Blaza. Panelo has emphasized that Blaza was supposedly unsure whether the Chinese intentionally rammed them, while most of the crew have already said that they were sure it was intentional because they were abandoned after the ramming.

Blaza was also solely invited to Manila by the DA based on the belief that he was the only crew member awake during the incident.

Insigne had also been invited to Manila to speak with President Rodrigo Duterte and the DA, but he backed out at the last minute after the remarks of Energy Secretary Alfonso Cusi that downplayed the damage to their boat as “daplis lang (only a graze).” – Rappler.com