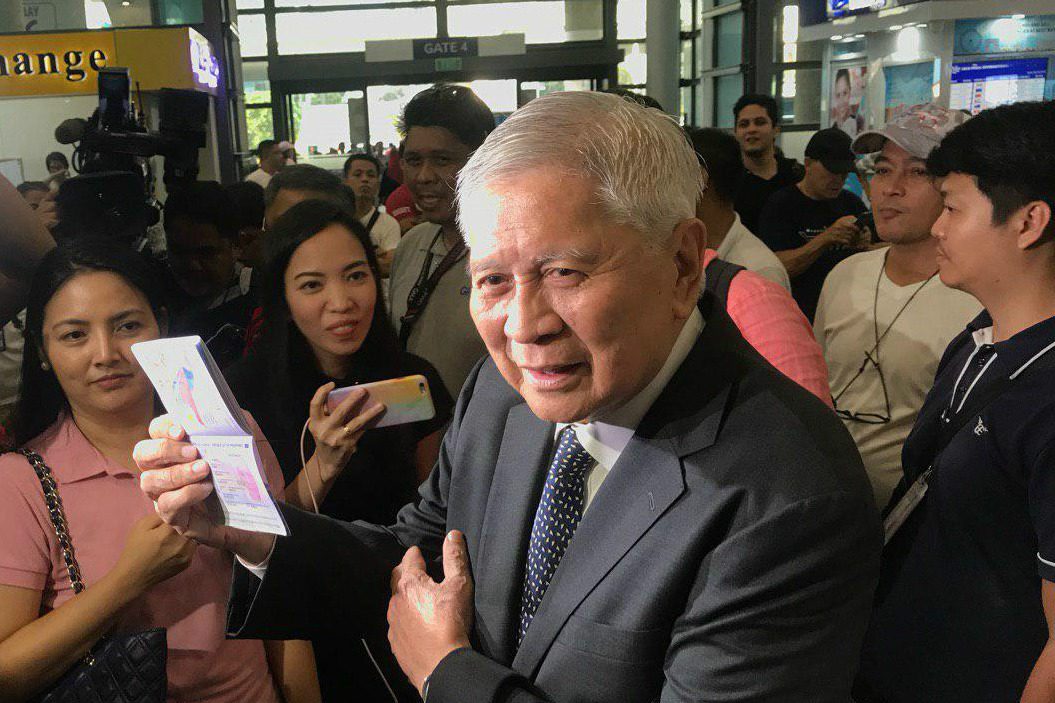 MANILA, Philippines (UPDATED) – Former Philippine top diplomat Albert del Rosario, who was denied entry to Hong Kong on Friday, June 21, said that the Department of Foreign Affairs (DFA) was aware that he was going to the country using his diplomatic passport.

“Before I went to Hong Kong, I wrote to the Department of Foreign Affairs that I was going to be traveling on business and I would be using the diplomatic passport. So they took that information and they give it to the Hong Kong consulate,” Del Rosario said.

“The Hong Kong consulate wrote a letter to the authorities but apparently, nobody knew where that letter is,” he added.

His statement comes after officials have criticized the former Cabinet member for using his diplomatic passport for his trip to Hong Kong.

He was held for “immigration reasons” which he attributed to the complaint he filed with former ombudsman Conchita Carpio Morales against China at the International Criminal Court (ICC).

Following the suggestion of the DFA, Del Rosario said he is planning to file a protest against Hong Kong authorities. Current DFA chief Teodoro Locsin Jr said the department will support the protest.

But Presidential Spokesperson Salvador Panelo said Del Rosario may have “misused” his diplomatic passport by using it for business travel that is “in no way related to government or foreign service.”

“As the country’s former chief diplomat, Mr Del Rosario should have known or have been alerted to the proper use of diplomatic passports and other travel documents,” Panelo said.

“Certainly, any country has the authority and the right to bar entry to any foreign national to its territory. Be that as it may, the Philippine government, through our consular office in Hong Kong, continues to provide assistance to Mr. Del Rosario, like all other Filipinos who may find themselves in distress abroad,” he added.

Senate President Vicente Sotto III also said that the Philippine Passport Act of 1996 “clearly enumerates the persons to whom a diplomatic passport may be issued.”

“This does not include former Cabinet secretaries,” Sotto said.

Diplomatic passports may only be used for “an official mission or travel” and has to be revalidated every time with a travel order, Sotto added.

“A travel order is only granted to the incumbent officials and employees of the government,” he said.

But Del Rosario said that Sotto’s statement is “incorrect.”

“I think he should consult with the DFA. That statement is not correct,” the former top diplomat said.

Del Rosario said he went to Hong Kong regularly for business using a diplomatic passport “every time and never had a problem.” It was the first time he had traveled to the city after the ICC filing. (READ: After denying Del Rosario’s entry, expert asks if Hong Kong still ‘safe’ for business)

The former top diplomat said Hong Kong authorities who denied him entry may be “in violation of the Vienna Convention.”

China has yet to offer an explanation, but Beijing’s foreign affairs ministry spokesman Lu Kang told reporters: “Who is allowed or not allowed to enter the country is entirely China’s sovereignty.”

But activists have been alarmed in recent years by what they feel is a tighter grip by Beijing, though Hong Kong still retains freedoms unseen on the mainland. – with reports from Agence France-Presse/Rappler.com