Jun 24, 2019 10:20 PM PHT
Ryan Macasero
Facebook Twitter Copy URL
Copied
Royina Garma says she has opted for early retirement from police service to take up the post as a civilian 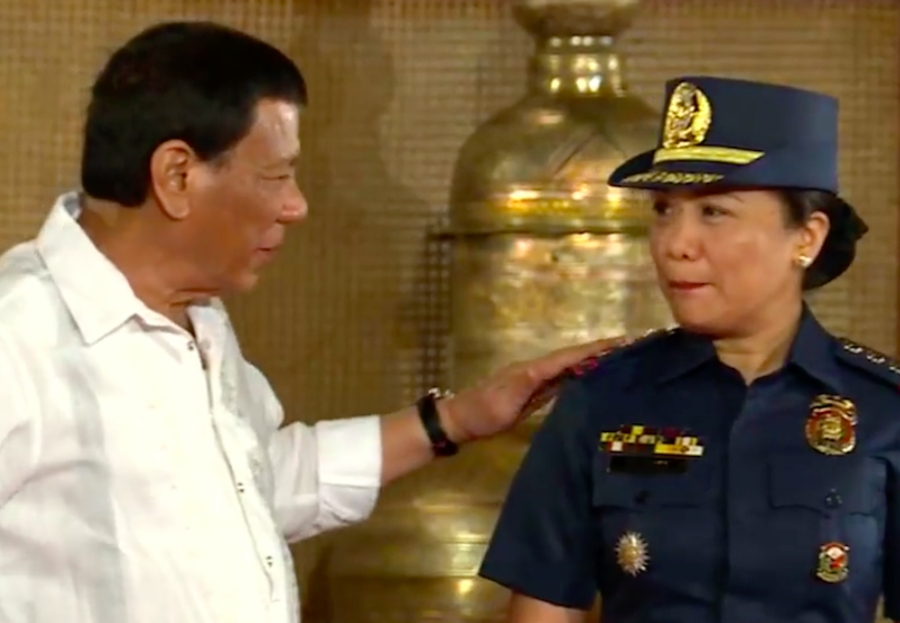 “Balutan has been out, si Garma ang papalit doon (Garma will replace him),” Duterte told reporters on the sidelines of the premier for the movie Kontradiksyon in Mandaluyong City on Monday evening.

PCSO’s former general manager Alexander Balutan, an ex-Marine officer, was fired in March by Duterte over allegations of corruption.

The position is currently being held by Anselmo Simeon Pinili, PCSO’s current chair, who is also a former police superintendent.

“We are happy about Colonel Garma’s promotion,” Sinas said. “And, basically, we’ll miss her, but we prefer her in PCSO so she could help us,” he added.

Garma said she had opted for early retirement from police service to take up the post as a civilian.

“I will leave the service,” Garma said. “I’ve been in service for 24 years, I am supposed to have 10 more years before retirement,” she added in a mix of Filipino and English.

She said she wanted to continue on what she called the “softer” side of public service through charity.

Garma said her posting in Cebu City is one she’ll “never forget. She has publicly feuded with outgoing Cebu City Mayor Tomas Osmeña due to the rise in the number of riding-in-tandem killings in the city.

Garma blamed Osmeña for slowing down “change” in the city. “[This] one year [was] very challenging,” Garma said. “It should have been better and it should have been faster change if there was cooperation [with] the LGU.”

On the issue of cooperation between local government unit and police, the outgoing mayor told Rappler in a text message, “Tell that to the tanods (watchmen) she (Garma) had killed in police raids. We have witnesses.”

He added: “Tell that to the houses of the barangay captains who were stranded. The worst police chief in 30 years all because she is suspected to control legal and illegal numbers games up to P800,000 a day. Now it’s like the thief being put in charge of a vault. Anyway, good riddance.”

Garma is among those included in a complaint by lawyer Jude Sabio, who represents Davao Death Squad whistleblower Edgar Matobato, for allegedly overseeing and supervising death squad operations in Davao City’s war on drugs when Duterte was mayor.

Garma, however, has shot back at almost every criticism by Osmeña and has said it’s the tough-talking mayor who uses his position to try to intimidate the police.

Osmeña filed a lawsuit against the police chief on May 7 for alleged irregularities and misconduct during police operations, according to a report in SunStar Cebu.

Sinas said they had submitted to the PNP headquarters a list of who they prefer to replace Garma, but did not mention the names on that list. Incoming Mayor Edgardo Labella’s choice was also included among the names they submitted. – Rappler.com