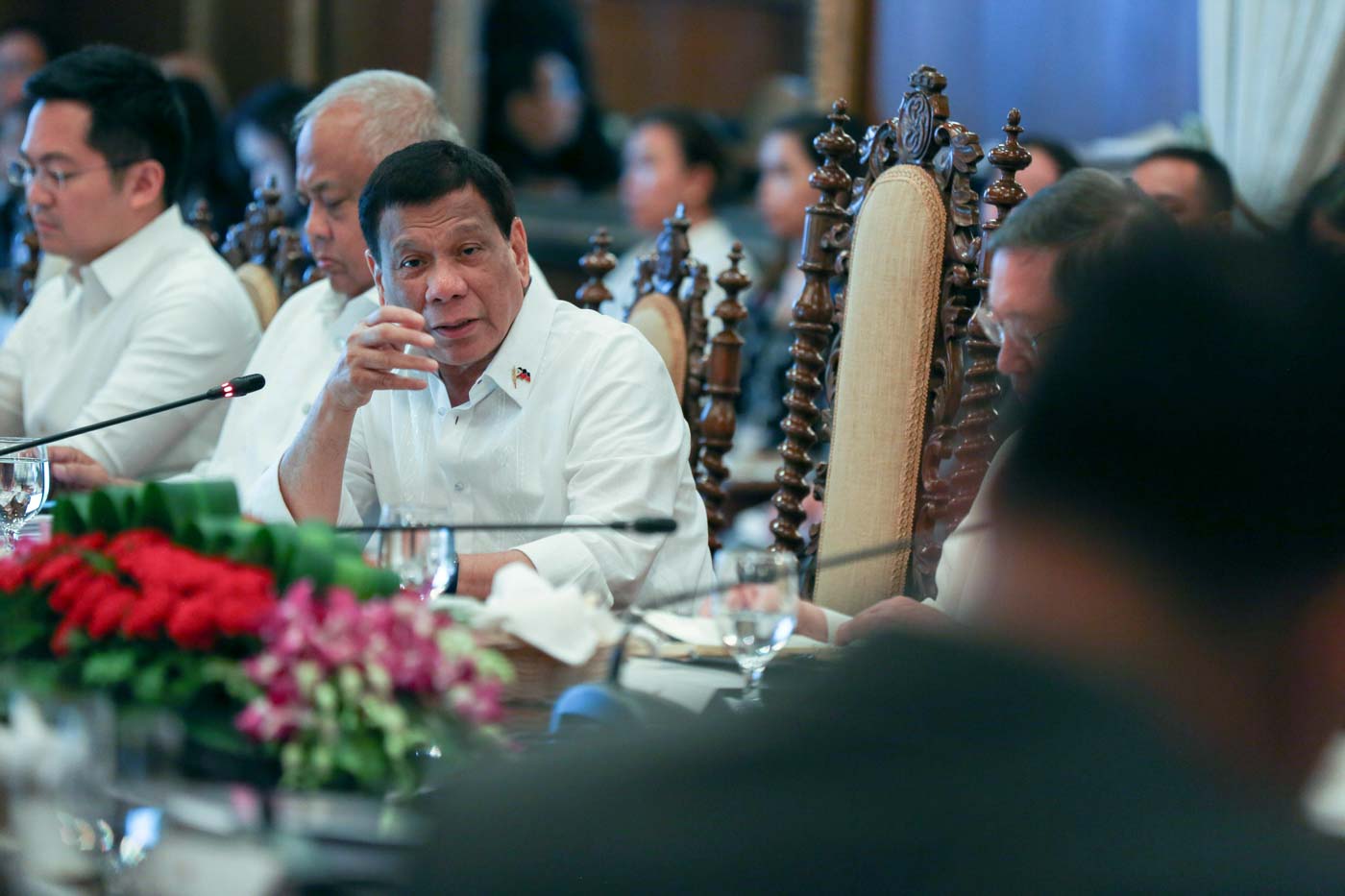 MANILA, Philippines – Members of the Duterte Cabinet hailed their principal, President Rodrigo Duterte, for his performance in the first half of his presidency, which is being marked on Sunday, June 30.

“He is consistent with what he has been doing and I’m pretty sure he will end up with a very strong presidency,” said Executive Secretary Salvador Medialdea on Monday, June 24, in an interview with Rappler.

Asked how he would explain Duterte’s high approval and satisfaction ratings in surveys, Medialdea said, “It’s simply because of his performance and the trust they (Filipinos) have placed [in] him.”

For Medialdea, who was Duterte’s lawyer back in his days as mayor and was a part of his 2016 campaign team, Duterte’s governance style has remained the same all these years.

Asked what Duterte’s biggest challenges have been as president, Medialdea said: “All were big challenges. Nothing was minor for him. Anything to do with his office, it’s serious for him.”

He surmised that perhaps the job of top diplomat, representing the country internationally, could have been one challenge for Duterte.

“Maybe, but that’s his style,” he said, referring to Duterte’s penchant for expletives and colorful threats, even to foreign dignitaries.

“President Duterte has a clear, long-term vision for the Philippines: a comfortable life for all Filipinos,” said Dominguez in a message to Rappler.

He pointed to record-low self-rated poverty incidence in a Social Weather Stations survey for the 1st quarter of 2019, and Philippine Statistics Authority numbers.

Despite a global downward trend in economic growth, higher world oil prices, and a “brief” period of high inflation, the Philippine economy grew at an average of 6.5% in the first 10 quarters of the Duterte presidency, said Dominguez.

As for the Tax Reform for Acceleration and Inclusion (TRAIN) law, the major economic reform Duterte pushed for, Dominguez cited 108% revenue attainment. TRAIN, however, was partially blamed for high inflation. (READ: [ANALYSIS] How the TRAIN law worsened poverty, inequality)

The Bureau of Internal Revenue had also missed its 2018 collection target despite TRAIN.

The rice tariffication law, also pushed by Duterte, was credited for easing inflation by liberalizing rice trading and making the food staple more affordable for Filipinos.

Dominguez credited Duterte’s “rebalancing of our foreign policy” for the pouring in of official development assistance (ODA) for the Build, Build, Build program.

“Both Japan and China have committed $9 billion each for the duration of the Duterte administration, while South Korea has pledged another $1 billion in ODA,” he said.

For Dominguez, Duterte’s greatest strength is “his commitment to carry out what needs to be done to effect real change.”

He described the Chief Executive as “strategic” and “decisive,” pursuing reforms even when they are “politically challenging” and “face significant opposition from sectors with vested interests.” (READ: [ANALYSIS] Duterte a ‘competent’ economic manager? Not so fast)

Trade Secretary Ramon Lopez said Duterte has lived up to his campaign slogan of “tapang at malasakit” (courage and compassion).

“Maka-tao, maka-Filipino (Pro-people, pro-Filipino). A sincere, selfless leader who puts his life on the line just to bring change and take away poverty,” said Lopez in a message to Rappler.

The President’s critics, meanwhile, have branded Duterte as the “biggest challenge to human rights,” with his threats to massacre drug suspects, shoot human rights activists, and kill priests.

“We now have relatively safer streets with the intense campaign against drugs and criminality. Anti-corruption [drive] with no sacred cows,” he said.

The drug war, however, has been tainted with reports of human rights abuses. Duterte himself had suspended the drug war and ordered revamps due to instances of police abuse.

The Duterte administration’s supposed “zero tolerance” for corruption has also been questioned. (READ: LIST: No to corruption? Duterte’s controversial reappointees)

“People can see his sincerity to serve and solve issues. Many have been accomplished, but the issues are never-ending. More work and reforms yet to be done,” said Lopez.

Socioeconomic Planning Secretary Ernesto Pernia, meanwhile, said that with Duterte at the helm, there were “more hits than misses insofar as the economy is concerned.” (READ: [ANALYSIS] Mere hiccups? Let’s be more honest about the economy)

The President’s greatest strength, to Pernia, is his “political will and heart for the poor.” (READ: What Duterte, economic managers said about the poor) – Rappler.com