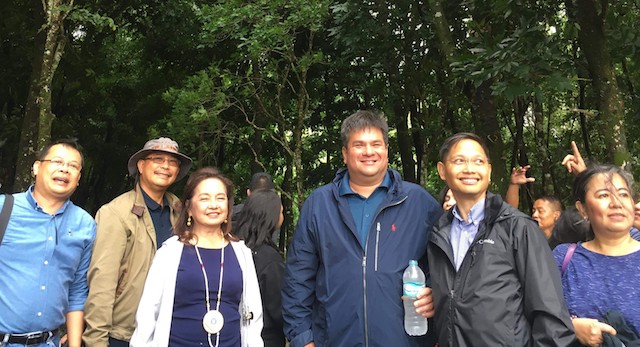 NEGROS OCCIDENTAL, Philippines – A couple of days before her retirement from politics, Speaker Gloria Macapagal Arroyo was in this province as part of her “sentimental journey” to areas where priority projects were carried out during her presidency.

Arroyo on Friday, June 28, visited the Bacolod-Silay Airport which was built during her presidency, and the Northern Negros National Park that was converted into a national park when she was Philippine chief.

Arroyo confirmed that the expansion of the Bacolod-Silay Airport was underway, adding that an unsolicited proposal to expand, operate, and maintain the airport through public-private partnership had been submitted by Davao-based Udenna Corporation.

She also said the unsolicited proposal will undergo a Swiss Challenge, meaning other qualified companies can challenge the proposal.

During the briefing with outgoing Negros Occidental Governor Alfredo Marañon Jr, incoming  Negros Occidental 3rd District Representative Francisco Benitez and Silay City Mayor Mark Golez, Arroyo was told that the technical expansion of the airport was “all in order” and that the financial evaluation was ongoing.

“The job of the government is to make sure this is not fly-by-night – that the financial is realistic and viable and not end up a burden to the national government afterward,” Arroyo said.

The former president had said that she would retire from politics after her term as Pampanga congresswoman ends on Sunday, June 30, and that she would write her memoirs.

As in her recent visit to Cebu, Arroyo again refused to respond to political questions. Asked who would likely succeed her as Speaker in the 18th Congress, she said, “Let’s go trekking,” as she was at the Northern Negros National Park.

President Rodrigo Duterte earlier said he had asked Arroyo to choose the best candidate for Speaker but she declined.

During her visit to Cebu on June 17, where she also visited some projects credited to her 9-year-presidency, she walked out of a press conference when she was asked about the speakership race. – Rappler.com