Jun 30, 2019 3:24 PM PHT
Boy Ryan B. Zabal
Facebook Twitter Copy URL
Copied
(UPDATED) This comes after the Department of the Interior and Local Government said the vice mayor can assume the mayoral post in the town of Malay, Aklan 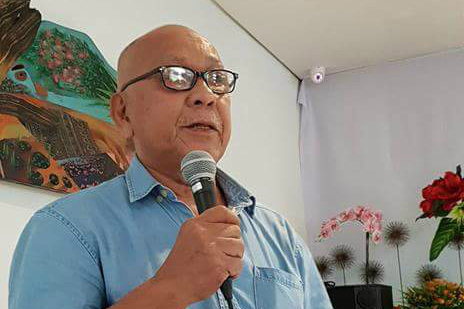 AKLAN, Philippines (UPDATED) – Malay Mayor-elect Ceciron Sacapaño Cawaling assumed office on Sunday, June 30, despite an advisory by the Department of the Interior and Local Government (DILG) to allow his vice mayor to assume the mayoral post.

Cawaling reported to work at the Malay municipal town hall with his supporters at noon on Sunday.

“Kailangan magkaisa tayo. Sa dinami-rami ng ating pinagdaanan, ang boses ng bayan pa rin ang mananaig. Maraming salamat sa inyong suporta at pagmamahal,” Cawaling said upon assuming office on Sunday. (We should unite. After all that we’ve been through, the voice of the people will still prevail. Thank you for your support and love.)

The regional director of the DILG in Western Visayas, Engineer Ariel Iglesia, had issued an advisory on Thursday, June 27, to allow Malay Vice Mayor-elect Floribar Sacapaño Bautista to assume the mayoral post on Sunday.

This followed the decision of the Office of the Ombudsman on April 22 to dismiss Cawaling and business licensing officer Jen Salsona.

The Ombudsman decision, implemented by the DILG on April 24, came with the forfeiture of retirement benefits and the perpetual disqualification for reemployment in the government service.

The two were dismissed after then-Interior Undersecretary Epimaco Velasco III filed an administrative complaint in June 2018 for grave misconduct and other offenses that allegedly led to Boracay Island’s environmental problems.

Following the rule of succession, Bautista said it was prudent to wait for the official order of the DILG before taking the post of Cawaling, who won a fresh mandate during the May 13 elections.

Iglesia said “to allow Mayor Cawaling to assume office on June 30 because of his reelection would resurrect the already abandoned Aguinaldo doctrine or the Condonation Doctrine…. Such scenario would render the Ombudsman decision inutile.”

“Notwithstanding the reelection of Cawaling, this office is of the view that the Ombudsman’s decision being executory shall continue to be in effect upon its implementation on April 24, 2019,” said part of the 4-page advisory of Iglesia.

Bautista said he was also advised by the Municipal Local Government Operations Officer VI Mark Delos Reyes to heed the order of the DILG.

If Bautista will sit as mayor, Cawaling’s son Niño Carlos, who is the Sangguniang Bayan member-topnotcher, will take over as vice mayor.

Cawaling has yet to issue an official statement regarding the possible succession of Bautista. – Rappler.com