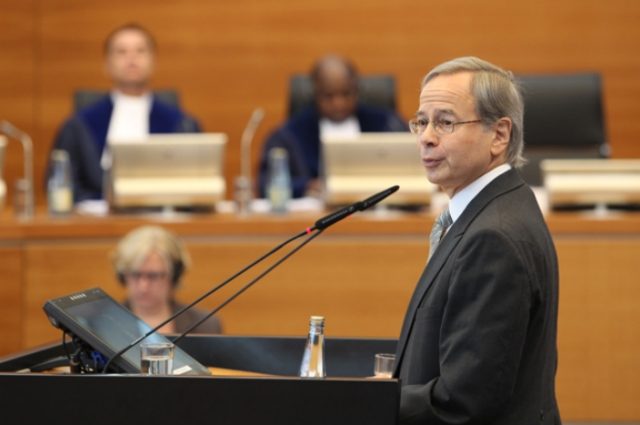 MANILA, Philippines – The sinking of a Filipino fishing boat by a Chinese ship in Recto Bank (Reed Bank) is a “clear violation” of international law, said the Philippines’ lead counsel in its case against China at The Hague.

A world-renowned lawyer, Paul Reichler said there is “a very strong case for state responsibility,” that is to possibly hold China – not only a private Chinese vessel – liable for the Recto Bank incident.

“First, it’s clearly a violation of international law by the Chinese,” Reichler said in an exclusive Rappler Talk interview aired on Wednesday, July 3.

He added, “The violation is compounded by the fact that China appears not to be taking any legal action against the perpetrators of this aggressive act, nor to my knowledge has it offered to compensate the Philippines for the damage caused to the Filipino fishing vessel.”

Reichler, who was in West Virginia, spoke to Rappler via Skype on Monday, July 1, ahead of the 3rd anniversary of the Philippines’ legal victory against China over the South China Sea. The Philippines is marking this anniversary on July 12.

Reichler stressed that Recto Bank, “which is approximately a hundred nautical miles off the coast of Palawan, lies plainly within the exclusive economic zone and the continental shelf of the Philippines.” (READ: Recto Bank: Why China covets what belongs to the Philippines)

The EEZ is the area 200 nautical miles from a coastal state’s baselines within which the state has the exclusive rights to fish and exploit resources such as oil and natural gas. (READ: Sovereignty vs sovereign rights: What do we have in West PH Sea?)

“So the Philippines has the exclusive right, under international law, particularly the United Nations Convention on the Law of the Sea, to the resources in these waters and under the seabed,” he said.

He also said the Chinese ship “interfered with the rights” of the Filipino fishermen “by damaging the vessel.”

“The Chinese vessel interfered with a Philippine vessel within a zone that belongs exclusively to the Philippines, and for that reason it is a clear violation of international law and the rights of the Philippines,” he said.

Reichler said China not only violated UNCLOS, but also another convention on maritime safety.

“The recklessness of the Chinese vessel, and the failure of the Chinese Coast Guard and Chinese authorities to take any action in response to this, would be violations of that convention,” he said.

He noted that in most other cases, “if this is an accident on the high seas,” and if two private fishing vessels collide, “that’s a matter between the two private parties.”

“But in this case, given the protection that the Chinese Coast Guard has routinely given to Chinese fishing vessels, particularly when they illegally enter Philippine waters, there would be a very strong case for state responsibility, that is for China itself to be held liable for the damage that was caused and for the intrusion into the Philippine maritime space, and the liability would extend beyond the owners or operators of the Chinese vessel that was responsible for the harm,” Reichler said.

“So in such a case, one would expect that there would be diplomatic consultation between the two states whose nationals were involved in the incident,” he added.

He surmised there should then be “an effort to clearly determine what the facts were” and the extent of the damage, and to negotiate “an appropriate compensation.”

Reichler also agreed with Antonio Carpio, senior associate justice of the Philippine Supreme Court, that the Chinese maritime militia is likely behind the Recto Bank incident.

“I think it’s very likely. I think that Justice Carpio is, first of all, a world-renowned expert on the law of the sea, and he’s a very serious and responsible lawyer and judge. I would have confidence in his opinion,” said Reichler.

Philippine President Rodrigo Duterte, however, dismissed the sinking of Filipino boat Gem-Ver in Recto Bank as “a little maritime incident.” Duterte echoed China’s stance that it was an “ordinary maritime traffic accident,” as his officials drew flak for “lawyering” for China.

Known as the “giant slayer of public international law,” Reichler was the same lawyer who won a landmark 1986 case by Nicaragua against his own country, the United States. Nicaragua had then accused the United States of funding rebels against a left-wing government.

In 2013, The Wall Street Journal had asked Reichler if his firm, FoleyHoag, does not “worry about offending China” by lawyering for the Philippines.

He said: “My FoleyHoag colleagues and I faced a choice: fight for justice, or avoid antagonizing the rich and powerful who could, if we cultivated them instead of suing them, become very profitable clients for the firm. Because we became lawyers to fight for justice, we have never hesitated in making these choices.”

In his interview with Rappler on Monday, July 1, Reichler said the Hague ruling on the South China Sea helps “smaller states that need the protection of international law” against their more powerful neighbors.

Reichler said, “It is another example of holding a great power accountable under the rule of law.” – Rappler.com