AMMAN, Jordan – (5th Update) The United Nations welcomed the release on Saturday of 21 Filipino peacekeepers, who had been seizedby Syrian rebels on the Golan Heights, as they crossed to freedom in Jordan after a three-day ordeal.

Philippine authorities also expressed relief at the release of the members of the UN Disengagement Observer Force (UNDOF).

A Jordanian military official said the peacekeepers were greeted by border guards as they crossed from Syria in the afternoon and “underwent medical examinations.”

They then boarded an army bus and were given a military escort to the east Amman headquarters of the armed forces where they were “handed over to the UN representative in Jordan, Costanza Farina, in the presence of the Philippines ambassador,” the official added in a statement. The peacekeepers are members of the UNDOF monitoring the armistice line between Syria and Israel that followed the 1973 Arab-Israeli war.

A video footage reportedly released by rebels who handed over the peacekeepers and posted by SITE Monitoring Service shows the soldiers in blue UN helmets and vests shaking hands with insurgents as they cross a small stream to Jordan.

The footage shows a man describing the event as a cameraman films the peacekeepers who are seen standing by a truck.

“The UN observers are now in Jordanian territory. They were taken to the Jordan border and given to Jordanian authorities…,” the man is heard saying.

The Filipinos were seized by rebels Wednesday near the armistice line in the first abduction of its kind since the the start of an uprising against Syrian President Bashar al-Assad two years ago.

UN Secretary General Ban Ki-moon “appreciates the efforts of all concerned to secure their safe release,” his office in New York said after the Filipinos crossed over from Syria.

“The secretary general emphasizes to all parties the impartiality of United Nations peacekeepers,” it added.

The peacekeepers were abducted by rebels from the Yarmuk Martyrs Brigade in Jamla village just a mile to the Syrian side of the armistice line. 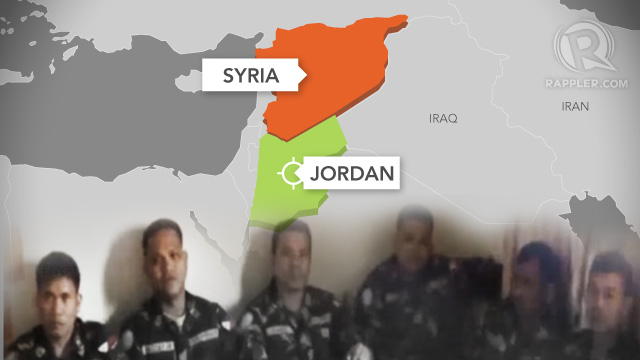 The rebels had made conditions for their release, namely that Syrian troops move 20 kilometres (12 miles) back from Jamla.

They also demanded that the International Committee of the Red Cross “guarantees the safe exit from the strife-torn area of Jamla of civilians,” said the head of the Syrian Observatory for Human Rights, Rami Abdel Rahman.

On Friday a UN attempt to pick up the peacekeepers was aborted when Syrian troops shelled the area.

Syria denied the shelling and the foreign ministry sent letters to Ban and the UN Security Council on Saturday “condemning attacks by terrorist groups against UN forces and residents” near the armistice line, state news agency SANA said.

It also called on the UN to “clearly condemn terrorist groups” — the term used by the regime to describe the rebels, the official Syrian news agency added.

The abduction was condemned by world powers and triggered a flurry of diplomatic action to secure the peacekeepers’ release.

It also sparked fears that more governments would withdraw their contingents from the already depleted UN mission.

Israel warned that any further reduction in UNDOF strength risked creating a security vacuum in the no-man’s land between the two sides on the strategic Golan plateau, which it seized in the 1967 Six-Day War.

Meanwhile on Saturday, Syrian troops bombarded several rebel-held areas near Damascus, where 10 people, including three children, were killed in clashes between troops and rebels, the Observatory said.

At least 49 people were killed across Syria on Saturday, the Observatory added. – Rappler.com