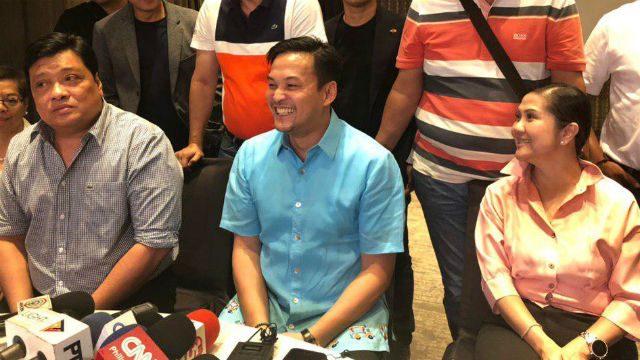 MANILA, Philippines –  Taking their cue from President Rodrigo Duterte, the 54-strong party-list coalition announced on Tuesday, July 9, that “for now,” it will back Taguig City-Pateros Representative Alan Peter Cayetano for Speaker.

Party-list bloc president and 1-Pacman Representative Michael Romero announced the group’s qualified support for Cayetano when he told  reporters on Tuesday, that they have decided to follow the Duterte-endorsed term sharing scheme between speakership bets Cayetano and Marindique Representative Lord Allan Velasco.

“We haven’t changed our position to vote as a bloc. We will vote as a 54-member bloc. We are for the President’s choice,” said Romero.

Pressed further if this meant a bloc vote for Cayetano – whom Duterte said would serve as Speaker for the first 15 months of the 18th Congress – Romero hesitated a little before answering, “Yes, for now”

The congressman, who laughed as he answered, later clarified: “[We recognize Cayetano as Speaker] for the 15th months, for now. Hindi natin alam kasi what will happen (We don’t know what will happen),” said Romero.

The party-list lawmakers met for about two hours in a hotel in Pasig City on Tuesday, a day after the President formally announced his support for a Cayetano-Velasco term sharing scheme. Cayetano will serve the first 15 months as Speaker, then Velasco will lead the House in the remaining 21 months.

Under the same agreement, Leyte 1st District Representative Martin Romualdez – another speakership contender – will become the House majority leader, a powerful post as he would be whipping the votes in the lower chamber.

The party-list bloc initially agreed to just choose between Velasco and Romualdez for Speaker, but Duterte’s support for a term sharing deal changed this.

On Tuesday, Romero said the party-list bloc members have generally accepted Duterte’s proposed deal between Cayetano and Velasco but added that they have yet to understand the “rules of the game.”

This is because leadership positions and committee chairmanships in the House tend to change under different Speakers, and initial agreements regarding appointments may still change.

“Generally, we are accepting the endorsement of the President because sabi ko, ‘yan ‘yung sentiment ng President, ‘yung endorsement. But we have to understand the rules of the game. ‘Yong rules ng game or ‘yong rules nitong pinagsama-sama ‘nyo, itong formula, hindi pa namin nakikita kung ano at this point,” said Romero.

For now, Romero said they trusted Cayetano to keep his end of the bargain, especially in granting 20% of the leadership posts in the House to party-list legislators.

“Of course we have to trust him on his word. But also we need to trust all of them that the 20% allocation for the party list should be given. For us, the party-list coalition, ‘yan ang mas important sa amin (that’s  what’s more important for us),” said Romero. – Rappler.com