Arroyo thanks Duterte for helping to acquit her of plunder 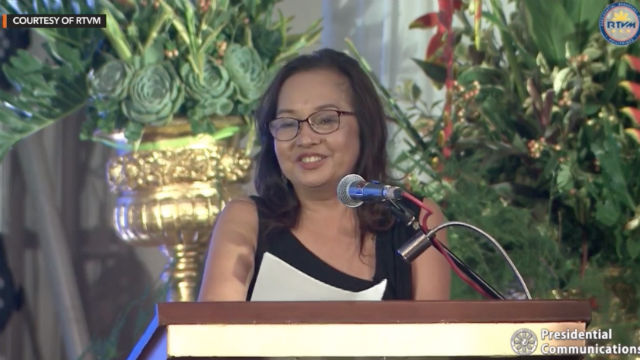 MANILA, Philippines – Former Speaker Gloria Macapagal Arroyo thanked President Rodrigo Duterte for “providing the atmosphere” that led to the acquittal of plunder charges against her.

On Tuesday, July 9, Arroyo was overflowing with gratitude for the President who attended the “appreciation dinner” hosted by 17th Congress lawmakers in honor of the former House speaker.

“Most of all, I thank you that when you became President, you provided the atmosphere in which the Court had the freedom to acquit me of the trumped up charges of my successor and your predecessor, so that the Court voted 11-4 in my favor, including half of those who were appointed by my successor,” said the former Pampanga 2nd District congresswoman.

It was during Duterte’s first months as President when the Supreme Court (SC), voting 11-4, acquitted Arroyo and former Philippine Charity Sweepstakes Office (PCSO) board member Benjamin Aguas of plunder over their alleged misuse of P366 million in PCSO funds from 2008 to 2010, or the tail end of Arroyo’s presidency.

The President himself had also repeatedly said he “owed” much to Arroyo, who contributed to his campaign funds in the 2016 presidential elections. (READ: Duterte admin revives Arroyo policies, controversies)

In the same speech on Tuesday night, Arroyo thanked Duterte for supporting her past successful candidacies for senator, vice president, and president.

Arroyo also thanked Duterte, whom she called her “friend,” for helping her address threats to peace and stability during her presidency.

“I thank you also for the active help you gave me fighting drugs, kidnapping, and all the threats to peace and stability when I was president. And after that, I thank you for describing me as a friend, both during your campaign for the presidency and after you were elected,” she said.

Arroyo, however, said that her “only regret” in her relationship with Duterte was that he had found her “very difficult to deal with.”

“It was never my intention to be difficult with you. How could it have been, with all my gratitude for all you have done for me and all our admiration for all that you’ve done for all of the country?” she said.

“So I only wish that I had better EQ so I could have second guessed everything you wanted so you would not have found me so difficult to deal with,” she added.

‘Proud’ to be Duterte’s friend

Still, Arroyo congratulated Duterte for getting his highest net satisfaction rating during the middle of his 6-year term. She praised the President for his achievements dating back to his days as Davao City mayor.

“You are the only Philippine President more popular in the middle of your term than in the beginning honeymoon period. You are the President most loved by his people among all leaders in the world today. I am proud to be your friend,” she added.

The Social Weather Stations June survey showed Duterte scored +68 in net satisfaction rating for his performance as Chief Executive. This score bests his previous high of +66, recorded last March and in June 2017. – Rappler.com