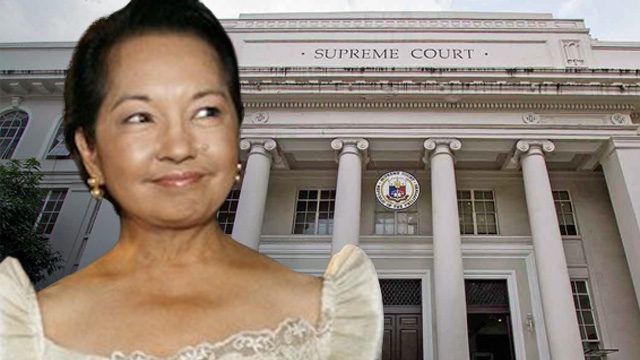 Facebook Twitter Copy URL
Copied
'The public can be assured that the Supreme Court has and will always act independently, and free from influence from the other branches of Government' says Supreme Court Spokesman Brian Keith Hosaka

MANILA, Philippines – The Supreme Court (SC) insisted it is independent after former House speaker Gloria Macapagal-Arroyo said in a speech Tuesday night that President Rodrigo Duterte “provided the atmosphere” that led to her acquittal in July 2016, or the first month of the Duterte presidency.

“The public can be assured that the Supreme Court has and will always act independently, and free from influence from the other branches of Government,” said SC Spokesman Brian Keith Hosaka on Wednesday, July 10, in response to reporters’ questions for comment.

Hosaka said he has not spoken to Chief Justice Lucas Bersamin yet.

Bersamin is the one who wrote the 11-4 ruling that did not only acquit Arroyo, but set the bar higher in convicting plunder by introducing the main plunderer doctrine.

“Most of all, I thank you that when you became President, you provided the atmosphere in which the Court had the freedom to acquit me of the trumped up charges of my successor and your predecessor, so that the Court voted 11-4 in my favor, including half of those who were appointed by my successor,” Arroyo said on Tuesday during lawmakers’ farewell dinner for her.

In the 11 concurring votes, 9 are his appointees, two are appointees of former president Benigno “Noynoy” Aquino III.

The rest of the Aquino appointees – Maria Lourdes Sereno, Marvic Leonen, Benjamin Caguioa – voted against the decision. Senior Associate Justice Antonio Carpio was the only Arroyo appointee who voted against her acquittal.

That Bersamin ponencia has helped grant bail to former senator Jinggoy Estrada in his ongoing plunder case over the pork barrel scam. The main plunderer doctrine is continuously being used now in plunder cases at the anti-graft court Sandiganbayan.

“The Supreme Court is guided by the rule of law and its decisions are always based on facts, laws, and reason. The decisions of the Supreme Court are open to the public, and we encourage those concerned to read them so they can understand the reasons why they were decided that way,” said Hosaka. – Rappler.com