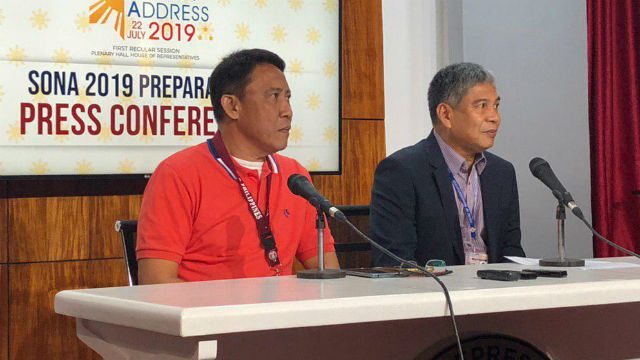 MANILA, Philippines – The House of Representatives is closely coordinating with government intelligence agencies to ensure the safety and security of guests who will attend President Rodrigo Duterte’s 4th State of the Nation Address (SONA).

On Thursday, July 11, House Sergeant at Arms Romeo Prestoza said they are directly working with the National Intelligence Coordinating Agency (NICA), Intelligence Service of the Armed Forces of the Philippines (ISAFP), and other intelligence units.

He said this is more crucial following the recent twin suicide bombings in Sulu.

(In my experience – I’ve been an intelligence officer for 27 years – we really consider those things. We don’t just ignore them, we assess. That’s why we initiated direct contact with NICA, ISAFP, and other intelligence units to see if there are any connections or if there’s any possibility of that happening here.)

But he gave an assurance that they have yet to detect any “substantial” security threats for Duterte’s SONA, which he will deliver at the Batasang Pambansa on July 22. (READ: Duterte may use SONA to ‘educate’ Filipinos about West PH Sea fishing rights)

Prestoza himself was once the chief of the elite ISAFP in 2008. He also served as the commander of the Presidential Security Group during the presidency of Gloria Macapagal Arroyo. She then appointed him as House sergeant at arms when she became the Speaker in July 2018.

According to Prestoza, the security personnel who will be deployed to Batasan have already undergone “extensive” training to prepare for any threats and emergencies.

“We have extensive training, seminars to include simulation exercises and tabletop exercises so in case there are threats, we would be prepared. And even the protocol when it comes to emergencies, we have that,” he said in a mix of English and Filipino.

In the same press conference, House Acting Secretary-General Roberto Maling said Task Force SONA 2019 is in the process of sending out invitations to the SONA, which is expected to be attended by top government officials, former presidents, and foreign diplomats.

Maling, however, said they have yet to finalize who will be singing the national anthem, though Broadway singer Arman Ferrer is already set to sing “Lupang Hinirang” when the House opens session in the morning at the same venue.

Award-winning television and movie director Joyce Bernal will once again direct the SONA, which she wants to capture as a “hopeful” event. – Rappler.com