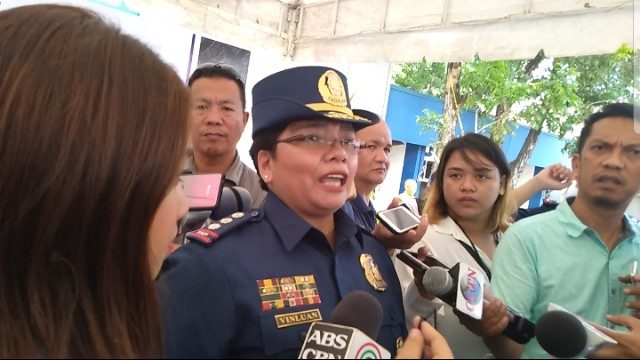 Facebook Twitter Copy URL
Copied
Colonel Vinluan says her orders to police are to neutralize, 'but not to kill' suspects

“Neutralize, not to kill. But to restrain them from doing harm to people and the police officers,” Vinluan told reporters on the sidelines of her turnover ceremony on Thursday, July 11. “But if they surrender themselves, I promise I will not hurt them, I will bring them to court alive,” she added.

According to an Ateneo de Manila University and De La Salle University study, Cebu City and province ranked third in the number of drug suspects killed in police operations after Metro Manila and Bulacan from 2016 to 2018.

Vinluan, who takes over from police colonel Royina Garma, breaks away from President Rodrigo Duterte’s pronouncements to shoot to kill drug suspects who allegedly fight back. (READ: Shoot to kill? Duterte’s statements on killing drug users)

The number of unsolved killings in Cebu City significantly increased under Garma’s watch starting in 2018. Ex-Cebu City mayor Tomas Osmeña had accused the outgoing chief along with Brigadier General Debold Sinas, the current police regional director, of being behind the killings. (READ: Crime City? Killings in Cebu rise as mayor, cops feud)

To address the unsolved killings, Vinluan said she would review the cases pending investigation and “build a team to ensure cases would be given justice.

“Pag nakita na ang baril, bibilangan siya hanggang dalawa, hindi tatlo (When they see a gun, they should only count to two, not three),” Vinluan said. “I cannot promise it will be less bloody, but they [suspects] will be given enough chance to surrender,” she added.

Prior to being assigned in Cebu City, Vinluan was head of the Women and Children Protection Desk at the Philippine National Police Headquarters in Camp Crame.

She said that aside from the war on drugs, she would prioritize campaigning to protect women and children from abuse in Cebu City. “We will have regular visitations to schools and set up PICAAC desks (women and children’s protection centers),” the first-time city director said.

“We will campaign to educate the public on different forms of child abuse. Rapists aren’t always random, they can be family members sometimes,” she added.

She also highlighted the importance of transparency in running the police office. “That [transparency] is very important,” Vinluan said.

“Good governance starts with transparency and accountability and that shouldn’t just go for the police but any government agency. The Philippines will never flourish if all people think about is how to make a quick buck,” she added.