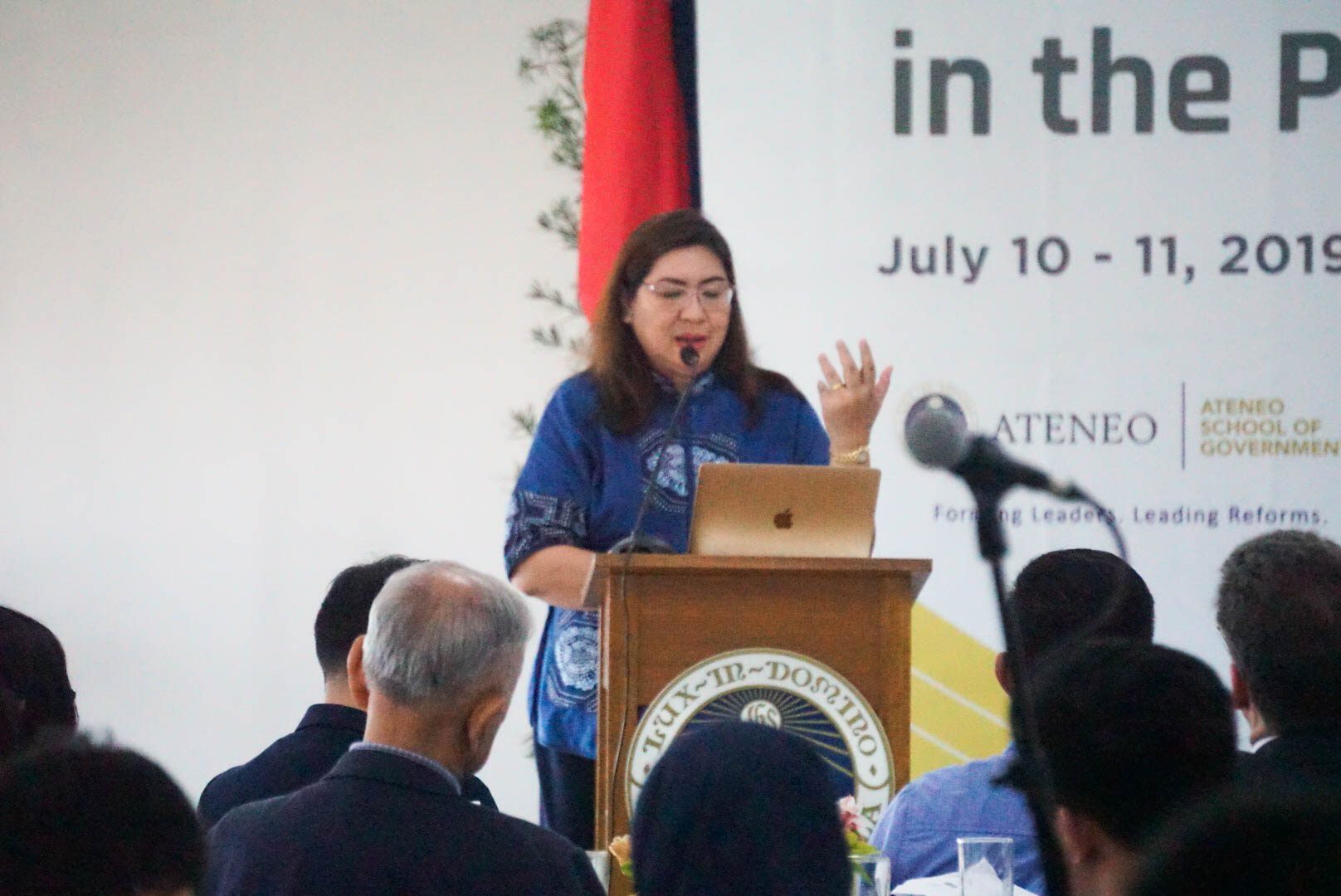 Facebook Twitter Copy URL
Copied
‘We’re like a pendulum. We cannot keep swinging from one extreme to the other,’ says Aileen Baviera, professor and former dean of UP’s Asian Center

MANILA, Philippines – A China expert from the University of the Philippines underscored the need to find a middle ground between the country’s powerful neighbor, China, and its longtime ally, the United States.

President Rodrigo Duterte’s critics are outraged as he continues to bow to China and downplay the international ruling won by his predecessor, Benigno Aquino III.

“We’re like a pendulum. We cannot keep swinging from one extreme to the other. We have to find our own middle ground,” Aileen Baviera, professor and former dean of UP’s Asian Center, said in a forum by the Ateneo School of Government on July 10.

Jay Batongbacal, director of the UP Institute for Maritime Affairs and law of the Sea, said these “great swings” have caused the Philippines “serious credibility problem when it comes to pushing any initiative when it comes to the South China Sea.”

Baviera characterized the government’s current China strategy as “bandwagoning.” In his speeches, Duterte concedes the country’s weakness against China as he constantly declares fear that any act of defiance will result in war breaking out.

Aquino, during his, closed ranks with the US to “balance” China. He filed a case before the Permanent Court of Arbitration in The Hague to push China to follow international law, a move that Beijing ignored but got the support of many countries.

“Others will argue that the previous government was balancing against China and what the current government is doing is, to some extent, corrective to the previous also extreme position,” said Baviera.

Asean, a regional grouping of 10 states including the Philippines, finds itself in the middle great power competition China challenges US for control of the South China, a route where more than half other world’s trade passes through.

“Of late, much of the conversation in international relations in our region has revolved around the relations between the two major powers,” said Baviera. The US and China have engaged not only in geo-strategic competition but also trade and technology wars.

The Philippines, as key claimant in the South China Sea and a treaty ally of the US, has tried to manage its relations with both countries. It bothers critics that Duterte displays a defeatist attitude as the government tries to negotiate with China key agreements with long-term implications, including a joint exploration of the disputed seas.

Tow, who attended the same panel on regional security where Baviera spoke, urged Asean countries to adapt a “unified Asean balancing strategy vis a vis the major powers.” He lamented how states have shown to be increasingly setting aside the agenda to push Asean centrality and neutrality.

“It is understandable for the Philippines and other Asean states to investigate the need to adjust their security relations with major powers…. But it is equally clear, however, that Asean states, including the Philippines, must not compromise Asean’s traditional approach of calibrating non-alignment  with selective external defense ties to the extent that the Asean states fall into any one major power’s strategic order by default,” Tow said.

Tow said the Philippines should keep its ties with the US, something Duterte previously threatened to cut.

“When push comes to shove, the Mutual Defense Treaty still stands as the major insurance policy for the Philippines to essentially rectify sudden crises such is the case with Marawi siege in 2017,” said Tow. The US military, along with Australia, flew P3 Orion surveillance planes over the battle area to help provide intelligence information on the enemies.

Tow also cited the importance of the US-Japan alliance. He said it is important to understand that the combined military power of the two countries “is still able to match or perhaps even exceed” Chinese military – notwithstanding China’s continued growth.

Japan’s private-led investments overseas are larger than China’s in the region, Tow said. Thus it “cannot be written out of any equation” as a “consequential power” to push into the region a liberal international order as alternative to China’s hierarchical order, he added.

Asean’s bid for a Code of Conduct

Baviera is still hopeful that Asean can find ways to be effective in pushing its agenda significantly.

“If Asean is not successful enough, then we really have only ourselves to rely on. If our political leaders and people feel that bandwagoning with a certain power is it, then you will be hard put to argue against that from an Asean perspective solely,” Baviera said.

Asean aims to put in place a Code of Conduct that will guide actions of states and militaries in the South China. But it’s been a slow moving process, taking 15 years to produce an outline although it now set a deadline of 3 years to produce a full blown document.

“This is another example of how talking basically has become a mode of dispute management within Asean. Sometimes I call it dispute concealment because, by dragging the discussions for as long as possible, the hope is focus will now turn to other issue and therefore keeps those countries from having to resolve those issues immediately,” Batongbacal said.

Notwithstanding the delays , Batongbacal highlighted the significance of the COC for “dispute prevention.” – Rappler.com