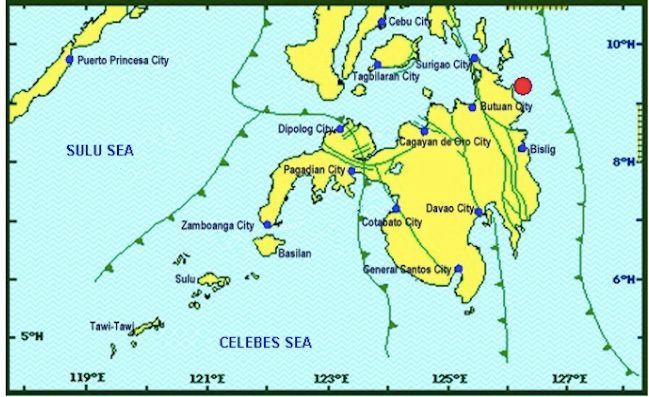 MANILA, Philippines (UPDATED) – Fifty-one people were injured and several homes, churches and other buildings damaged on Saturday, July 13, when an earthquake sent terrified residents of the southern Philippines fleeing their homes before dawn, police said.

The magnitude 5.5 earthquake struck east of Carrascal town in Surigao del Sur at 4:42 am (2042 GMT Friday) at a depth of 5 kilometers, with the Philippine Institute of Volcanology and Seismology (Phivolcs) also recording 7 less intense aftershocks.

The following intensities were recorded, according to Phivolcs:

Officers at the police station in Madrid town, near the epicenter, ducked beneath tables as the glass door of a filing cabinet splintered and a television set fell and shattered off a table, said its police chief Lieutenant Wilson Uanite.

“We saw people running out of their homes. A number of residences sustained minor damage like cracked walls,” Uanite told Agence France-Presse (AFP) by telephone.

Patients were also evacuated at the Madrid District Hospital, which sustained cracks on its concrete walls, he added.

The roof of an old car park in Madrid collapsed, causing slight damage to the town’s two fire trucks and 3 cars, Uanite said.

The impact was also felt in 4 neighboring towns, damaging homes, two Catholic churches, a hotel, a gym, a bridge and a public market, the civil defense office in the region said in a written report.

A restaurant tipped over into a nearby river in Cantilan town, while residents reported broken plates and glass and ceramic decorative figurines in their homes, police officer Johannes Tipon told AFP by telephone.

In Cantilan, masonry from a construction site fell through the roof of a neighboring house, injuring a girl and her father as they slept, Tipon added.

The Philippines is part of the Pacific “Ring of Fire,” an arc of intense seismic activity that stretches from quake-prone Japan through Southeast Asia and across the Pacific basin.

The country’s most recent deadly quake occurred in April when at least 11 people were killed in a 6.3-magnitude temblor that hit a region north of the capital Manila, causing a supermarket to collapse. – Rappler.com